WHO
Antimicrobial resistance (AMR) threatens the effective prevention and treatment of an ever-increasing range of infections caused by bacteria, parasites, viruses and fungi.
15 September 2016

“The emergence of antimicrobial resistance really threatens to send us backwards – to have infections once again become a much larger killer of people,” Assistant Director-General of the UN World Health Organization (WHO) and Special Representative for Antimicrobial Resistance Keiji Fukuda told a news briefing today at UN Headquarters in New York.

“By 2050, estimates indicate more people could die from antibiotic resistant infections than those who currently from cancer. This is a surprising comparison, this means that almost 10 million people would die from infections because they those couldn’t be treated anymore,” he added.

The High-Level Meeting on Antimicrobial Resistance, convened by the President of the UN General Assembly, WHO and the UN Food and Agricultural Organization (FAO), will be held on 21 September on the side-lines of the high-level segment of the Assembly’s 71st session.

In his briefing today, Mr. Fukuda also highlighted that the economic cost of such a scenario would also be staggering, and warned that the cumulative economic loss on having to take care of people suffering from such infections and possible subsequent deaths could exceed $100 trillion by 2050.

“This is in the order 2 to 3.5 per cent of the global [gross domestic product], enough to send countries backward, particularly those that are in precarious economic conditions,” he said, noting that, even more importantly, it would hamper medical and health systems from being able to take care of and treat people.

Furthermore, noting that sustainable food supplies depend heavily on antibiotics because they are used to treat sick animals and to prevent the spread of diseases, he said that with rising global populations, availability of food to feed everyone would depend heavily on the efficacy of antibiotics.

Mr. Fukuda stressed that eroding healthcare and the inability to feed people, compounded by enormous economic cost, could potentially take away countries’ ability to continue with development, in particular sustainable development.

By discussing antimicrobial resistance next week at the high-level meeting, the senior UN official said that Heads of State and Government would send a very visible sign that they understand the gravity of the situation and that they are committed to addressing it.

Through a political commitment on the issue, the meeting will help facilitate concrete coordination among different sectors and help implement it in practice, he added.

The event will also help secure the engagement and support of multiple sectors which are vital to address such a complex, global challenge, said Mr. Fukuda.

Antimicrobial resistance occurs when microorganisms (such as bacteria, fungi, viruses and parasites) change as they are exposed to antimicrobial drugs (such as antibiotics, antifungals, antivirals, antimalarials and anthelmintics) used to treat the infections they cause. These are sometimes referred to as “superbugs.”

As a result, the medicines become ineffective and infections persist in the body, increasing the risk of spread to others. 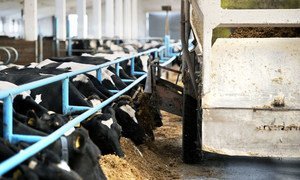