UN Photo/Evan Schneider
A wide view of the Security Council meeting on the situation in the Middle East, including the Palestinian question.
15 September 2016

United Nations Secretary-General Ban Ki-moon today called for intensified efforts to encourage Israelis and Palestinians to take the difficult steps required to change the current destructive trajectory of the conflict, which is heading towards a “one-state reality” rather than a peaceful resolution.

“Twenty-three years ago, almost to the day, the first Oslo Accord was signed between Israel and the Palestine Liberation Organisation,” the Secretary-General told the Security Council in a briefing on the situation in the Middle East.

“Unfortunately, we are further than ever from its goals. The two-state solution is at risk of being replaced by a one-state reality of perpetual violence and occupation,” he warned.

Despite warnings by the international community and the wider region, leaders on both sides have failed to take the difficult steps needed for peace, the UN chief said.

Just yesterday, militants in the Gaza Strip fired yet another rocket into Israel, and in response, Israel fired four missiles at targets in Gaza. “Such attacks, and the response they elicit, do not serve the cause of peace,” he warned.

Turning to Israel’s settlement activities, Mr. Ban said that in the past two weeks alone, plans were advanced for yet another 463 housing units in four settlements in Area C of the West Bank. Official Israeli data shows that the second quarter of 2016 had the highest number of construction starts in three years.

“The decades-long policy that has settled more than 500,000 Israelis in Palestinian territory is diametrically opposed to the creation of a Palestinian state,” he said.

“Let me be absolutely clear: settlements are illegal under international law. The occupation, stifling and oppressive, must end,” he said.

The international community, including the Security Council and the diplomatic quartet on the Middle East peace process – comprising the UN, Russia, the United States and the European Union – universally views settlement expansion as an obstacle to peace, Mr. Ban said.

Regrettably, both sides have made remarks that only perpetuate an environment of mistrust, the Secretary-General said, citing a recent statement by Israel’s Prime Minister portraying those who oppose settlement expansion as supporters of ethnic cleansing, as well as Palestinian parties’ praise of despicable acts, such as the 1972 terrorist attack against Israeli athletes at the Munich Olympics.

On the first local Palestinian elections in over 10 years encompassing both the West Bank and Gaza, Mr. Ban said he is particularly concerned by last week’s decision of the Palestinian High Court to suspend all preparations while deliberations continue on a petition to cancel elections.

The elections, if held in line with international standards, could provide an important renewal of Palestinian democracy and a first step towards advancing national unity, he stressed.

International stakeholders must continue to work towards a negotiated end to the occupation, now entering its 50th year, and the establishment of a viable, democratic Palestine which lives in peace with Israel – “each respecting the other’s historic and religious connections to this holy land,” he said.

Turning to Gaza, he noted that there has been progress in rebuilding the enclave in the two years since the ceasefire in the 2014 conflict. But 65,000 people remain displaced, he said, underscoring the need for more assistance to rebuild nearly 5,000 destroyed houses.

Apart from reconstruction, Gaza’s humanitarian needs “run deep.” More than 1.3 million of its 1.9 million people need assistance, explained the UN chief, and he encouraged Member States to provide in a predictable manner financial support to the UN Relief and Works Agency for Palestine Refugees in the Near East UNRWA.

Looking at the broader situation, Gaza remains under closures and is a “ticking time bomb.” Indeed, lasting progress in Gaza can only be realized on the basis of Palestinian unity, an end to the illicit arms build-up and militant activities, and a full lifting of movement and access restrictions.

On the situation in the Golan Heights, Mr. Ban said he remains concerned by the continued breaches of the ceasefire line, and by fighting in the areas of separation and limitation. These developments undermine the 1974 Disengagement of Forces Agreement, and jeopardize the ceasefire between Israel and Syria.

In particular, recent fire from the Syrian Arab Armed Forces impacted the Israeli-occupied Golan. On both occasions, Israeli Defense Forces had responded with an airstrike. “I call on Israel and Syria to abide by the terms of the Disengagement Agreement and exercise maximum restraint,” Mr. Ban said. 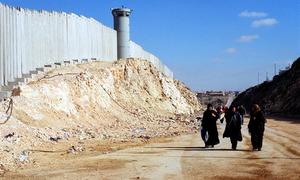 The economy of the Occupied Palestinian Territory could easily produce twice the gross domestic product (GDP) it generates now, while unemployment and poverty could recede significantly, according a new United Nations report.