The situation in eastern Ukraine remains volatile and continues to have a severe impact on human rights. Photo/ UNHCR
15 September 2016

A new United Nations report released today shows a 66 per cent increase in the number of conflict-related civilian casualties in eastern Ukraine and describes the deterioration of the human rights situation there, as a result of escalating hostilities between the Government and non-Government forces from June to August.

“The escalation of hostilities along the contact line over the summer was a sharp reminder that the situation in eastern Ukraine deserves much more attention,” said UN High Commissioner for Human Rights Zeid Ra'ad Al Hussein, in a news release issued by his Office (OHCHR). “Additional efforts are needed to find a lasting solution to this crisis and put an end the suffering of the civilian population. Human rights and justice are what people need, not further deaths and more intense hatred and destruction,” he added.

The report, which was compiled by the UN Human Rights Monitoring Mission in Ukraine and covers the period from mid-May to mid-August, documents 188 civilian casualties in eastern Ukraine, including 28 dead and 160 injured; up 66 per cent from the previous three-month period.

The report states that in the east, the proximity between Government forces and armed groups at the contact line – some 300 to 500 metres apart in certain locations – has contributed to raising the intensity of the hostilities during the period. In addition, the report states that the proliferation of arms and the positioning of their fighters and weapons in populated residential areas by both sides have heightened risks and harm to civilians.

While more than half of all civilian casualties recorded in June and July resulted from shelling across the contact line, considerable number of civilians were also killed and injured by mines, explosive remnants of war and booby traps. The number of civilians who died as a result of the secondary effects of violence, including lack of food, water, medicine or healthcare, remains unknown.

In fact, there is a real risk that a new outbreak of violence could happen at any time

By 15 September 2016, OHCHR recorded 9,640 conflict-related deaths and 22,431 injuries among Ukrainian armed forces, civilians and members of the armed groups since the conflict began in mid-April 2014.

“While the situation has improved since the ceasefire was restored on 1 September, the situation along the contact line remains deeply unstable, as demonstrated by the incidents which took place last week-end. In fact there is a real risk that a new outbreak of violence could happen at any time,” said High Commissioner Zeid.

The report shows that civilians living in the conflict-affected area are deprived of protection, access to basic services and humanitarian aid, and their freedom of movement is severely hampered.

UN human rights monitors also found that about 70 per cent of the alleged human rights abuses and violations they documented between mid-May and mid-August involved allegations of torture, ill-treatment and incommunicado detention.

The very limited accountability for these violations and abuses, which have been committed by both sides, remains a key issue. “Where conflict-related cases have been prosecuted there have been serious concerns about due process and fair trial rights,” says the report.

The report also highlights the gradual deterioration of the human rights situation and regression of fundamental freedoms in the Autonomous Republic of Crimea. With the increasing integration into the Russian Federation, there is a lack of accountability and redress for victims of human rights abuses, in particular detainees. The right to peaceful assembly has also been further curtailed by the de facto authorities and people continue to be interrogated and harassed by law enforcement agents for expressing views that are considered to be extremist, according to the report. 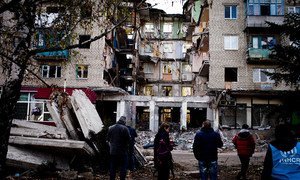