The United Nations agricultural agency today released a new action plan to help countries combat the spread of antimicrobial resistance in their food supply chains and to counter the growing threat of medicine-resistant ‘superbugs.’

“Antimicrobial medicines play a critical role in the treatment of diseases of farm animals and plants. Their use is essential to food security, to our well-being, and to animal welfare,” said the UN Food and Agricultural Organization (FAO) in a news release.

“However, the misuse of these drugs, associated with the emergence and spread of antimicrobial-resistant micro-organisms, places everyone at great risk,” it added.

According to the agency, its Action Plan on Antimicrobial Resistance will focus on improving awareness of antimicrobial resistance (AMR) issues among farmers, veterinary professionals, authorities, policymakers and food consumers.

Additionally, antimicrobials are added in low concentrations to animal feed as a way to stimulate growth – a practice that is increasingly discouraged but still relatively common.

Checking the increase of antimicrobial resistance

To cope with the challenges of AMR, the UN agricultural agency underlined the importance of reducing the need for antimicrobial medicines in the first place, such as through vaccinating farm animals to build their natural ability to withstand disease. It also stressed that by adhering to best practices for hygiene, biosecurity, and animal care and handling, farms can minimise outbreaks and spread of diseases.

“Another key need is the lack of a global, standardized approach to data used to track the use of antimicrobials in livestock,” said FAO in the release, referring to a report by the UK Government's O'Neill commission which found that only 42 countries have such systems in place.

“Risks from AMR in agriculture are higher in countries where laws, regulations and monitoring systems are weak,” the agency noted.

On its ongoing work, FAO also mentioned that the joint FAO-World Health Organization (WHO) Codex Alimentarius Commission, which sets international food quality and safety standards, has already laid the foundations for food safety control authorities to tackle AMR in food via a range of standards on AMR, veterinary drugs and their residues, food hygiene, and animal feed. Codex recently established a dedicated AMR task force.

In the release, FAO also mentioned that the launch of the Action Plan is particularly timely given that the risk to human health posed by AMR as well as its connection to and impact on agriculture will be discussed at a high-level UN event to be held on 21 September in New York on the side-lines of the General Assembly. 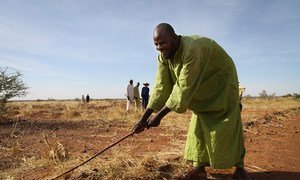 The United Nations agricultural agency today signed a $15 million agreement with the United States Agency for International Development (USAID) to boosting the capacity of developing countries to track key agricultural data – information considered essential to good policy-making and that will help track progress toward achieving the Sustainable Development Goals (SDGs).