OCHA/G. Seifo
UN aid trucks arrive in the Syrian town of Madaya, which has been slowly starving since October 2015.
13 September 2016

Some 24 hours after the latest cessation of hostilities in Syria began, a United Nations envoy today said that despite allegations of mortar shelling and airstrikes yesterday evening, violence in the country has declined substantially.

"By early morning, every report we have been seeing indicates a significant drop in violence," the UN Special Envoy for Syria, Staffan de Mistura, told a news briefing at the UN Office at Geneva. “Today, calm seems to have prevailed across Hama, Latakia, Aleppo City and rural Aleppo and Idlib – with only some allegations of sporadic and geographically isolated incidents.”

Mr. de Mistura also reported that sources on the ground in Aleppo city said the situation had “dramatically improved” with no airstrikes, while the capital, Damascus, and central Syria also remained calm with “reports limited to some clashes around Harasta between government and opposition forces.”

By early morning, every report we have been seeing indicates a significant drop in violence.

In addition, while incidents have been reported in the city of Al Qunaitra, capital of the south-western province of Quneitra, including between the al-Nusra Front and government forces, violence has dropped considerably compared to other days.

According to the UN Office for the Coordination of Humanitarian Affairs (OCHA), Syria is one of the most complex and dynamic humanitarian crises in the world today. Since March 2011, more than a quarter of a million Syrians have been killed and over one million have been injured. 4.8 million Syrians have been forced to leave the country, and 6.5 million are internally displaced, making Syria the largest displacement crisis globally.

In 2016, an estimated 13.5 million people, including six million children, are in need of humanitarian assistance. Of these 5.47 million people are in hard-to-reach areas, including close to 600,000 people in 18 besieged areas.

In his remarks, the UN envoy underscored that this was only the first day of the truce, noting that the US and Russia would formally assess “the level of health” of the cessation at a 48-hour benchmark. “Hopefully we have another five days of cessation of hostilities and then… other benchmarks that are expected to take place,” he said.

The US and Russia are the co-chairs of the international grouping known as the ISSG, which comprises the UN, the Arab League, the European Union and 16 other countries, and has been involved in efforts to resolve the conflict.

Mr. de Mistura said that in addition to the two co-chairs, the government of Syria, Iran Hezbollah, Turkey and armed oppositions have all, in one form or the other, voiced support for the agreement.

Noting that after five years of conflict, further violations of the ceasefire agreement were "unavoidable," he cautioned against any renewed violence that may have a "snowball effect" on the situation, and described the disengagement that is scheduled to take place within a week between the armed opposition groups from the al-Nusra Front as “quite a challenge.”

On the humanitarian front, Mr. de Mistura said that to make sure that aid can reach those in need, there should be no conditions or preconditions to its delivery.

Regarding humanitarian assistance, there is some homework to be done

“Regarding humanitarian assistance, there is some homework to be done,” continued the UN envoy, as he pointed out that while some 24 aid trucks were "loaded and ready" to go into east Aleppo, the Syrian Government – which controls what is reported to be the last non-government supply route into the city, Castello Road – must allow “unhindered access” with simple notification to the government on the content of the trucks “and then no checking on UN trucks that have been sealed and then after that, a report of what has been distributed."

“The Aleppo provincial council needs to accept the fact that this aid is urgent and it is according to [the] UN approach and according to a well-recognized agreement,” he added, while also noting that he understood that Russia was working on “helping the unhindered access of the convoys.”

In his comments, Mr. de Mistura also highlighted a timeline, saying that if the 48-hour benchmark worked out – including agreed-upon humanitarian access, with “no bombs and more trucks” – followed by the creation of a joint command centre between Russia and the US to plan air operations in the country, a meeting on Syria may take place in New York during the General Assembly, and then a Security Council session on 21 September. 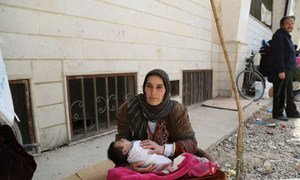 Welcoming a new understanding on cessation of hostilities in Syria, announced today at the end of a marathon meeting between the senior officials from United States and Russia, United Nations Special Envoy for Syria Staffan De Mistura has said that the UN would do "whatever it can" to support an early restoration of the cessation of hostilities.