First, he said, the timing of the report’s launch was important as this year marked the first year of the implementation of the 2030 Agenda for Sustainable Development and also a half-way through the implementation of the Istanbul Programme of Action (IPoA), which was adopted in 2011 as the international community's vision and strategy for the sustainable development of LDCs for the next decade.

Second, he said, the report was also important as it discusses the synergies in the implementation of the IPoA and the 2030 Agenda in the coming five years.

According to the Office of the High Representative for Least Developed Countries, Landlocked Developing Countries and Small Island Developing States (OHRLLS), the category of LDCs, which represent the poorest and weakest segment of the international community, was officially established in 1971 by the General Assembly with a view to attracting special international support for the most vulnerable and disadvantaged members of the UN family.

Their low level of socio-economic development is characterized by weak human and institutional capacities, low and unequally distributed income and scarcity of domestic financial resources. They often suffer from governance crisis, political instability and, in some cases, internal and external conflicts. Their largely agrarian economies are affected by a vicious cycle of low productivity and low investment.

The new report, according to a news release from OHRLLS, highlights how progress towards graduation from the LDC category has accelerated, with 10 LDCs currently in the graduation process. Positive developments are apparent in mobile cellular subscriptions, which have almost doubled and access to clean water which increased from 60 per cent in 2005 to 68 per cent in 2014. LDCs have made substantial progress in child mortality and gender parity in primary education.

“Business as usual would not help us implement both SDGs and IPoA. We need a paradigm shift in the way we work on development issues,” Mr. Acharya said at the news conference.

The High Representative also cited some specific policy recommendations in the report on how to accelerate implementation of the IPoA while building coherence and synergy with Agenda 2030.

The current list of LDCs includes 48 countries (the newest member being South Sudan), with 34 in Africa, 13 in Asia and the Pacific and one in Latin America. For LDC country profiles, click here. 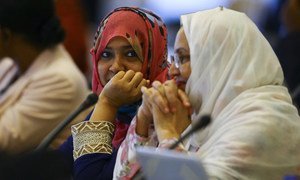 A major United Nations meeting focusing on the world's least developed countries (LDCs) has closed today in Antalya, Turkey, with a call for greater support to the world's most vulnerable nations, and the adoption of an outcome document paving the way for further concrete action and progress in the years to come.