The top United Nations humanitarian official in Yemen has voiced apprehension over a series of deadly air strikes on a water well which killed and wounded dozens of people in the country’s centre.

“I remain deeply disturbed by the unrelenting attacks on civilians and on civilian infrastructure throughout Yemen by all parties to the conflict, which are further destroying Yemen’s social fabric and increasing humanitarian needs, particularly for medical attention at a time when the health sector is collapsing,” the UN Humanitarian Coordinator in Yemen, Jamie McGoldrick, said in statement issued by the UN Office for the Coordination of Humanitarian Affairs (OCHA) yesterday.

According to reports, on Saturday, 10 September, 30 people were killed and 17 others wounded, including first responders and two children, as a result of several air strikes on a water well in the village of Beit Saadan in the Arhab District, in the north of Sana’a Governorate.

Yemen has been engulfed in violence for some years now. A confrontation between the country’s Houthis (Ansar Allah) and the Government of Yemen in early 2014 led to a Houthi advance on the country’s capital, Sana'a in 2014, and an ensuing conflict which has involved support from outside parties. The United Nations has been heavily involved in efforts to resolve the crisis, and repeatedly said that there is no military solution to the Yemeni crises and has called for a return to peaceful negotiations.

Until they recently went into a break, Kuwait had been hosting peace talks – facilitated by the UN envoy – with the Yemeni sides. The break went into effect in early August.

The conflict in Yemen, according to OCHA, has exacted a severe toll on civilians. More than a year and a half into the escalation of violence there, some 2.8 million people have been displaced and 13.6 million people are being targeted to receive humanitarian assistance. Nearly 100 humanitarian partners are participating in the humanitarian response across the country’s 22 governorates.

The weekend attacks came after weeks of intensified air strikes and ground fighting across the country, including missile attacks from the direction of Yemen toward Saudi Arabia, Mr. McGoldrick noted in the statement.

“I call on all parties to uphold their obligations under international humanitarian and human rights law, to recommit to the 10 April Cessation of Hostilities and to support the initiatives of the UN Special Envoy for Yemen,” he added. “By doing so, they will help avoid further loss of life in Yemen and help position Yemen on a path towards peace.” 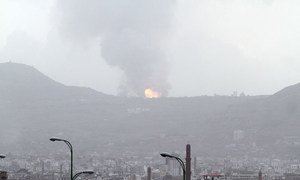 The United Nations Security Council today urged the parties to the conflict in Yemen to immediately resume talks with the UN envoy for that country and discuss his proposal for a comprehensive agreement covering both security and political issues.