Acting on humanitarian grounds and at the request of the Government of the Democratic Republic of the Congo (DRC), the United Nations mission in the country has extracted hundreds of individuals, including the former Vice-President of South Sudan, Riek Machar, members of his family and aides, as well as a number civilians from a national park in the DRC.

In a news release issued yesterday, UN Stabilization Mission in the DRC (MONUSCO) said that many of those extracted were wounded, acutely malnourished or in other life-threatening conditions.

Detailing the extractions undertaken at the Garamba National Park, located in the Haut Uélé province in north-eastern DRC, the Mission noted that Mr. Machar along with his wife, son and 10 aides were extracted on 17 August; 291 individuals extracted between 24 August and 1 September; 62 individuals in critical medical condition on 9 September; and an additional 116 in similar conditions on 10 September.

In total, MONUSCO said that it has handed over 117 individuals, including Mr. Machar, his wife and son to the DRC authorities and that weapons were removed from all those who were transported by the mission.

It added that as of 8 September, some 183 individuals are in MONUSCO-run facilities in two locations, where security arrangements are in place. It further added that those injured or in need of medial care are receiving treatment or are recovering at UN facilities.

According the Mission, Mr. Machar had crossed into the DRC from South Sudan, accompanied by wife and son, and by several hundred others, including armed elements and civilians.

In the news release, the Mission also said that it is keeping the DRC authorities fully informed and UN Headquarters is engaging with both the DRC and South Sudan authorities, as well as regional actors, to encourage them to find a solution to the presence of South Sudanese armed elements in the territory of the DRC. 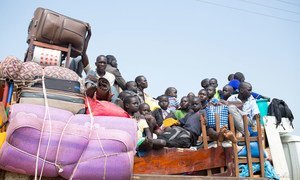 Some 60,000 people have fled South Sudan's recent violence in the capital city of Juba, bringing the overall number of South Sudanese refugees in neighbouring countries since December 2013 to nearly 900,000, the United Nations refugee agency said today.