UNICEF/Fred Borba
Adriana Almeida Santos, 15, carries the Olympic Flame in the city of Belém in state of Pará, Brazil.
8 September 2016

Welcoming the start of the 2016 summer Paralympic Games, which got underway in Brazil’s Rio de Janeiro yesterday, United Nations Secretary-General Ban Ki-moon has said that the Games not only showcase the extraordinary abilities of athletes living with a disability, they also promote the rights of all persons with disabilities.

“The Secretary-General believes that Paralympic athletes are change makers and role models, and are symbols of courage and aspiration for us all,” the Secretary-General’s spokesperson, Stéphane Dujarric, told a news briefing at UN Headquarters in New York today.

Mr. Dujarric added that the UN chief believes that sport has a particularly important role to play in promoting and implementing the Convention on the Rights of Persons with Disabilities and that the Paralympic Movement provides a catalyst for lasting change.

Separately today, the UN Children’s Fund (UNICEF) highlighted that the Paralympic Games prove that an individual’s ability, and not their disability, defines what they can accomplish.

“The Paralympic Games […] and this video shows that there should be no limits on what a child can aspire to – in sport, in school or in life,” said UNICEF Executive Director Anthony Lake in a news release announcing the release of the video.

Produced through a collaboration between the UN agency, FC Barcelona Foundation and the International Paralympic Committee (IPC), UNICEF said that the video illustrates “the power of sports to level the playing field for everyone.”

The release added that this week also marked the 10th anniversary of the UNICEF-FC Barcelona Foundation partnership that has provided access to education, sport and play to more than a million children who might otherwise be excluded from such opportunities.

The video will be shown at sporting venues throughout the Paralympic Games, which conclude on 18 September.

♦ Receive daily updates directly in your inbox - Subscribe here to a topic.
♦ Download the UN News app for your iOS or Android devices.
olympics

With Olympics set to start, UN to issue six ‘Sport for Peace’ stamps 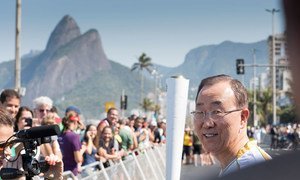