Colombia: UN official welcomes start of reintegration of children from FARC-EP on Saturday

A senior United Nations official today welcomed the announcement by the Government of Colombia and the Revolutionary Armed Forces of Colombia-People’s Army (FARC-EP) that they will begin the separation and reintegration of all children under the age of 18 associated with the FARC-EP on Saturday.

“I am heartened to see that the commitment and tireless efforts of all those involved in this process, especially the Government of Colombia and the FARC-EP, are about to bring tangible results for children deeply affected by the conflict,” the Secretary-General’s Special Representative for Children and Armed Conflict, Leila Zerrougui, said in a news release.

The separation and reintegration of children will be done in compliance with an agreement signed in the Cuban capital of Havana on 15 May this year. Ms. Zerrougui had been present for the signing.

On Tuesday, according to Ms. Zerrougui’s office, the two parties further agreed on a protocol detailing steps for the separation and reintegration of children who will leave the FARC-EP camps, in accordance with the principle of the best interest of the child, and ensuring their treatment as victims.

“By saying ’yes’ to peace, the Government and the FARC-EP, supported by the United Nations and civil society, are signalling a desire to work together towards a common objective and build a better future for these children and for the country as a whole,” Ms. Zerrougui said.

The news release noted that the final peace agreement of 24 August recalled the primacy of child rights, in accordance with the Constitution of Colombia, and highlighted the importance of ensuring the restoration of these rights without delay to guarantee the children can experience a childhood and adolescence in peace.

Children leaving the FARC-EP camps will receive care and services to respond to their specific needs to ensure their successful reintegration, with the support of the UN Children’s Fund (UNICEF) and partners.

The news release added that, in accordance with the wishes expressed by the parties, Special Representative Zerrougui stands ready to support, accompany and oversee the implementation of the agreement, and looks forward to the separation of the first group of children on Saturday.

Colombia’s steps towards peace are the culmination of various efforts. Since 2012, the parties had been in talks hosted in Cuba. Throughout the discussions, negotiators reached agreement on key issues such as political participation, land rights, illicit drugs and victims' rights and transitional justice – as well as the May agreement on releasing and reintegrating child soldiers from the opposition force.

In June, Secretary-General Ban Ki-moon travelled to Havana, where he witnessed the bilateral signing of a ceasefire and the laying down of arms and noted that the “peace process validates the perseverance of all those around the world who work to end violent conflict not through the destruction of the adversary, but through the patient search for compromise.” 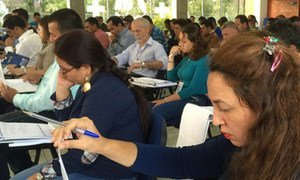 Following a recent agreement to end more than 50 years of conflict between the Government of Colombia and the Revolutionary Armed Forces of Colombia-People’s Army (FARC-EP), a seven-day training session on monitoring and verifying their bilateral ceasefire has begun in the country’s western city of Popayan, with United Nations support.