“The engines of growth and economic power are shifting across the globe. Asia continues its rise as a centre of technological progress, dynamism and influence,” the UN chief told the 11th East Asia Summit, which opened in Vientiane, the capital of the Lao People’s Democratic Republic (Lao PDR), today.

The East Asia Summit, hosted and chaired by Lao PDR this year, gathers countries within and beyond East Asia to further objectives such as regional peace, security and prosperity. Established in 2005, it has evolved as a forum for strategic dialogue and cooperation on such issues of common regional concern.

However, the Secretary-General said in his remarks, East Asia faces “some grave threats and challenges to peace and security that put at risk our shared goals and raise the spectre of turmoil and violence.”

Deeply concerned about the heightened tensions on the Korean Peninsula, Mr. Ban called “in the strongest possible terms” for the Democratic People’s Republic of Korea (DPRK) to abide by all the relevant resolutions of the Security Council, which has met eight times so far this year to discuss the threats posed by the country.

In a press statement on Tuesday, the Council condemned the ballistic missile launches conducted by the DPRK on Monday, 5 September, and called again on the DPRK to refrain from further actions in violation of Council resolutions and to comply fully with its obligations under these resolutions.

“The members of the Security Council deplore all Democratic People’s Republic of Korea ballistic missile activities, including these launches, noting that such activities contribute to the Democratic People’s Republic of Korea’s development of nuclear weapons delivery systems and increase tension,” the 15-member Council said in the press statement, which noted that the launches were in “grave violation” of the country’s international obligations under various resolutions it has adopted.

In his speech today, Mr. Ban also urged the leaders of the DPRK to “reverse their course, take steps towards de-escalation, and commit to de-nuclearisation.”

The Secretary-General encouraged the leaders who gathered for the summit to strengthen cooperation in responding to the threat of terrorism and the spreading poison of violent extremism. The recent terrorist attacks in Davao City in the Philippines are a reminder of the global nature of these threats, he noted.

“I urge all countries to implement relevant recommendations from the Plan of Action to Prevent Violent Extremism that I presented earlier this year to the United Nations General Assembly,” he said.

The Plan calls for a comprehensive approach encompassing not only essential security-based counter-terrorism measures but also systematic preventive steps to address the underlying conditions that drive individuals to radicalize and join violent extremist groups. It provides more than 70 recommendations to Member States and the UN system.

In his remarks, the UN chief also called for concerted efforts to prevent tensions over territorial or maritime claims from impinging on regional relations and stability.

“I have consistently urged all parties to resolve their disputes in the South China Sea in a peaceful and amicable manner, through dialogue and in conformity with international law,” he said. “It is more important than ever to exercise the utmost restraint. Tensions can only be eased through dialogue with one another through constructive approaches and through efforts to understand the perspectives of all parties.”

East Asia also faces serious challenges in dealing with the production, trafficking and consumption of illicit drugs and the chemicals used to make them, the Secretary-General said. The high-level debate at April’s UN General Assembly Special Session on the World Drug Problem adopted the outcome document, with a strong focus on prevention and the treatment of drug users.

“This outcome document is consistent with the approach of the United Nations,” he said.

Mr. Ban noted that over the past ten years, he has seen East Asia make significant advances in conflict resolution, sustainable development, democratization and human rights.

“East Asian countries met or nearly met almost all the Millennium Development Goals, setting an inspiring example for progress towards the SDGs [Sustainable Development Goals] and the 2030 Agenda,” he said.

“But there is still much work to do to ensure that everyone, throughout this region, enjoys basic freedoms, rights and opportunities,” he added.

While in Asia, the Secretary-General also visited Singapore, Myanmar, Sri Lanka, and China.

Also today, the Secretary-General met with the Prime Minister of Viet Nam, Nguyen Xuan Phuc, and discussed the cooperation between that country and the UN, including the implementation of the Sustainable Development Goals and disaster management, while reaffirming the importance of the UN delivering as one entity, according to a readout issued by Mr. Ban’s office.

The Secretary-General also encouraged Viet Nam to ratify the Paris Agreement on climate change in the near future, and discussed the partnership between the Association of Southeast Asian Nations and the UN and regional issues, including the South China Sea. 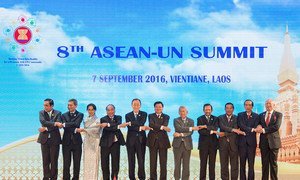 Speaking at a gathering of the Association of Southeast Asian Nations (ASEAN) and the United Nations today, Secretary-General Ban Ki-moon welcomed the focus of cooperation between the two organizations on a range of sectors, including the 2030 Agenda for Sustainable Development, and gender equality and women’s empowerment.