UN Photo/MB
Ms. Margaret Joan Anstee, who is paid tribute to today, is pictured here in her function of Officer in charge of Technical Assistance Board (TAB) Field Office in Montevideo, Uruguay.
8 September 2016

The United Nations chief today paid tribute to Margaret Anstee, a long-serving official who was the first woman to be appointed to the highest ranks of the world body, and who passed away recently.

“Right until the end of her life, Margaret Anstee called for greater international cooperation and collective action for peace, sustainable development and human rights,” Secretary-General Ban Ki-moon said in a message ahead of her funeral in the United Kingdom on Friday.

“She was a true global citizen whose career is a powerful testament to the power of individuals to make a difference in our world,” he added.

The UN chief noted that Ms. Anstee had dedicated herself for many years to working in difficult conditions in developing countries around the world. This included, at different points in her career, being responsible for delivering disaster relief in Bangladesh and in Mexico, helping the children of Chernobyl after the nuclear accident, and running peace operations in Angola.

Ms. Anstee passed away on Thursday, 25 August, and her funeral will be held on Friday. She had served the United Nations for 41 years before retiring in 1993. However, she remained actively involved in international affairs.

Born in 1926 in rural England, she graduated from the University of Cambridge in 1944 –

three years before the institution began admitting women to full degree status – and went on to further study and academia before joining the United Nations in 1952, where she subsequently had a string of ‘firsts’ to her name.

President Fidel Castro of Cuba (centre) and Margaret Joan Anstee, Director-General of the UN Office at Vienna and Secretary-General of the Congress, are welcomed on their arrival at the Palacio in Havana before the start of the eighth United Nations Congress on Prevention of Crime and Treatment of Offenders

The Ad Hoc Group on Equality for Women

She spent the early years of her career working on development projects in field missions across the globe, and was appointed the first female Resident Representative for the UN Development Programme and held the role in eight different countries in Africa, Asia and Latin America. In 1987 she became the first woman to be appointed to the rank of Under-Secretary-General, one of the UN system’s highest.

“Ms. Anstee brought energy, humility, courage and a sense of adventure to everything she did,” the Secretary-General said, “from negotiating peace with rebels in Nigeria, to spiriting UN staff out of Chile in the days following the 1973 coup.”

She served concurrently as the Director-General of the UN Office in Vienna and Head of the Centre for Social Development and Humanitarian Affairs, coordinating all UN drug-control programmes.

She was also the first woman chosen to lead a UN peacekeeping mission, in 1992, heading the UN Angola Verification Mission II (UNAVEM II), and serving as the Secretary-General’s Special Representative in the African nation. Established in 1991 and closing in 1995, UNAVEM II had the following mandate: to verify the arrangements agreed by the Angolan parties for the monitoring of the ceasefire during that country’s civil war.

“Ms. Anstee was well aware of her role as a pioneer,” Mr. Ban said. “She never shied from risk and urged women to test themselves and support each other. She was an inspiring role-model for generations of women diplomats who followed in her footsteps.”

Ms. Anstee’s activities following her retirement were varied and tended to have an international relations aspect. In 1994, she wrote a report for the UN Conference on Trade and Development and served as an advisor to the Government of Bolivia. From 1996 onwards, she was an advisor to the UN Departments of Political Affairs and Peacekeeping Operations and assisted in training for troops being deployed as ‘blue helmets.’ She also wrote on her book on her life experiences.

♦ Receive daily updates directly in your inbox - Subscribe here to a topic.
♦ Download the UN News app for your iOS or Android devices.
passing 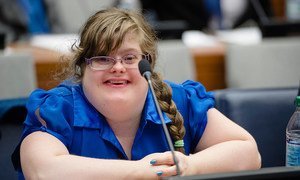 Noting that national policies often tend to treat women and girls with disabilities as helpless objects of pity or allow them to be treated in that manner, the United Nations Committee on the Rights of Persons with Disabilities has stressed that, instead, they need to be empowered and allowed to enjoy their fundamental rights and freedoms, as any other person.