UN Photo/Eskinder Debebe
Secretary-General Ban Ki-moon (fifth from left) poses for a group photo with participants of the eighth summit between the Association of Southeast Asian Nations and the United Nations (ASEAN-UN Summit), in Vientiane, Lao People’s Democratic Republic.
7 September 2016

Speaking at a gathering of the Association of Southeast Asian Nations (ASEAN) and the United Nations today, Secretary-General Ban Ki-moon welcomed the focus of cooperation between the two organizations on a range of sectors, including the 2030 Agenda for Sustainable Development, and gender equality and women’s empowerment.

people, planet, prosperity, partnership and peace,” Mr. Ban said in his opening remarks at the 8th ASEAN-UN Summit in Vientiane, the capital of the Lao People’s Democratic Republic (Lao PDR), referring to the 2030 Agenda and its Sustainable Development Goals (SDGs) as well at the Paris Agreement on climate change.

“Now we need the resources to put this plan into action,” he added.

On 1 January 2016, the 17 SDGs of the 2030 Agenda for Sustainable Development — adopted by world leaders in September last year – officially came into force. Over the next fifteen years, with the aim of achieving the SDGs, countries will mobilize efforts to end all forms of poverty, fight inequalities and tackle climate change, while ensuring that no one is left behind.

If nine more ASEAN countries ratify, we will have just 19 more countries to go.

In his remarks, the UN chief highlighted that the ASEAN-UN Plan of Action provides an opportunity to promote the complementarity of ASEAN’s Community Vision 2025 with the 2030 Agenda.

He further encouraged ASEAN leaders to establish a coordinating mechanism, under their direct leadership, to ensure the implementation of the SDGs in their respective countries.

Turning to the Paris Agreement, Mr. Ban thanked the Lao PDR, which also holds the 2016 ASEAN chair, for depositing its instrument of ratification – thus becoming the first ASEAN country to do so. He called on other ASEAN leaders to follow suit and ratify the Paris Agreement at the earliest possible moment.

“We need 28 more countries to ratify, accounting for a further 16 per cent of greenhouse gas emissions, to bring this agreement into force,” said the Secretary-General. “If nine more ASEAN countries ratify, we will have just 19 more countries to go.”

Underscoring that both the Paris Agreement and the 2030 Agenda were founded on respect for human rights and democracy, Mr. Ban encouraged the gathered leaders to work for equality, inclusivity and accountability in their governments and societies.

“We must now explore ways to mainstream human rights across all areas of the ASEAN-UN partnership,” he said.

Concluding his remarks, Mr. Ban congratulated Lao PDR for the launch of its own national sustainable development goal, centred on the removal of unexploded ordnance, and recalled his visit to a local school training people in demining and his visit to a community-based drug treatment centre in the capital, supported by the UN Office on Drugs and Crime (UNODC).

The Secretary-General is currently in Lao PDR as part of a wider visit to Asia, which included visiting Singapore and China, in addition to attending the ASEAN-UN Summit and related meetings.

Earlier today, the UN chief also met the Lao PDR’s President Bounnhang Vorachith, as well as Prime Minister Thongloun Sisoulith. In those encounters, Mr. Ban congratulated the country on its leadership of ASEAN and welcomed its ratification of the Paris Agreement on Climate Change.

Also today, the Secretary-General attended the launch of the UN-Lao PDR Partnership Framework which includes 21 UN agencies supporting the country with a combined annual budget of $80 million for technical cooperation.

Speaking at the launch, Mr. Ban highlighted that the UN team will focus its programmes on supporting the country in its efforts to help the most vulnerable: poor children and young people; women in remote rural areas; people from disadvantaged ethnic groups; and people with disabilities. 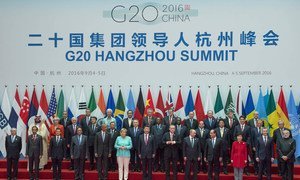 At a G20 summit in the southeastern city of Hangzhou in China, United Nations Secretary-General Ban Ki-moon today welcomed the conference's focus on sustainable development and climate change, urging all countries to take early action on these.