The economy of the Occupied Palestinian Territory could easily produce twice the gross domestic product (GDP) it generates now, while unemployment and poverty could recede significantly, according a new United Nations report.

“Chief among these are the confiscation of Palestinian land, water and other natural resources; loss of policy space; restrictions on the movement of people and goods; destruction of assets and the productive base; expansion of Israeli settlements; fragmentation of domestic markets; separation from international markets and forced dependence on the Israeli economy,” it added.

In late June 2016, 19 Palestinians, including 12 children, lost their homes when Israeli forces demolished 5 structures in Susiya, south of Hebron, in the occupied Palestinian territory. Photo: OCHA

In its executive summary, the report goes on to note that occupation imposes a heavy cost on the economy of the Occupied Palestinian Territory, which might otherwise reach twice its current size. Yet, to date, attempts to estimate the economic cost of occupation remain partial and ad hoc. Also, there is a need to establish a systematic, comprehensive and sustainable framework within the United Nations system to report to the General Assembly, as it has requested in past resolutions.

“The report concludes that examination of these costs and of other obstacles to trade and development is essential to place the Palestinian economy on the path to sustainable development and to achieve a just settlement of the Palestinian-Israeli conflict, as well as lasting peace in the Middle East,” UNCTAD said, while also flagging that despite limited resources, it continues to deliver technical cooperation, training and advisory services to the Palestinian people.

Impact of de-agriculturalization and de-industrialization

The report’s findings include that a continuous process of de-agriculturalization and de-industrialization has deformed the structure of the Palestinian economy. From 1975-2014, the share of the tradable goods sector made up of agriculture and industry in GDP dropped by half, from 37 per cent to 18 per cent, while its contribution to employment decreased from 47 per cent to 23 per cent.

In January 2015 alone, 5,600 productive trees were vandalized, adding to the more than 2.5 million productive trees (including 800,000 olive trees) that have been uprooted since 1967, according to the UN agency. Furthermore, Palestinians are prohibited from maintaining or digging water wells, while Israel has been extracting much more water than the level stipulated by the 1995 Oslo Accords and confiscating 82 per cent of Palestinian groundwater. “The Palestinians are left with no choice but to import their own water from Israel to cover 50 per cent of their consumption,” UNCTAD noted in the news release.

Slow reconstruction since the Israeli military operation in Gaza in 2014 has compounded the adverse trade and development impact of Israel’s prolonged occupation of the Palestinian territory, according to the UNCTAD report.

“Following the economic decline of 2014, which was mainly the result of the Israeli military operation in Gaza, the economy of the Occupied Palestinian Territory grew by 3.5 per cent in 2015,” UNCTAD said in the news release. “However, this was not sufficient to lift stagnant per capita income, which remains below its 2013 level.”

“The report also attributes the economic weakness to a decline in foreign aid and Israel’s withholding of Palestinian tax revenue during the first four months of 2015,” it said. 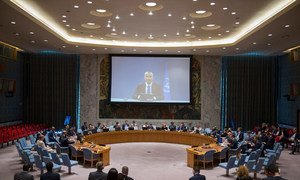 The United Nations senior official coordinating efforts towards the peaceful resolution of the Israeli-Palestinian conflict today reiterated a call for both sides to work towards a negotiated two-state solution which envisages the co-existence of Palestine and Israel as amicable neighbours.