UN Photo/UNMISS
US Ambassador Samantha Power speaks in South Sudan on 4 September 2016, after the UN Security Council delegation draws a consent from the Transitional Government of Nation Unity to deploy a 4,000-strong regional protection force to improve security in and around the capital, Juba.
4 September 2016

The announcement was made today in a joint communique issued at the end of a meeting between President Salva Kiir and the Security council delegation.

“To improve the security situation, the Transitional Government of National Unity gave its consent to the deployment as part of UNMISS [UN Mission in South Sudan] of the Regional Protection Force" in line with Security Council resolution 2304 (2016), according to the communique read by the country's Cabinet Affairs Minister, Martin Elia Lomoro.

In early July, close to the fifth anniversary of the country's independence, the youngest nation was plunged into fresh violence due to clashes between rival forces – the Sudan People's Liberation Army (SPLA), loyal to President Kiir, and the SPLA in Opposition, backing former First Vice-President Riek Machar. That led to deaths and injuries, including those of several UNMISS peacekeepers, also undermining the implementation of the peace agreement between the political rivals in August 2015, which formally ended their differences.

The Council, as well as various senior UN officials, including UN Secretary-General Ban Ki-moon, repeatedly spoke out against the violence, calling for calm and the safety of civilians.

"The United Nations Security Council and the Transitional Government of National Unity agree to work in a fresh spirit of cooperation to advance the interests of the South Sudanese people, particularly their aspirations for justice, liberty and for prosperity. They agreed that the humanitarian and security needs of the people were paramount,” said the communique.

The Security Council delegation is led by the Permanent Representatives of the Missions of Senegal and the United States, comprising representatives of all the other permanent and rotating member states of the 15-nation body.

“UNMISS has an impartial mandate to protect civilians, no matter who they are or where they are,” said United States Ambassador Samantha Power, the co-leader of the Council delegation, noting that consultations are under way to decide the modalities of deployment of the regional protection force.

According to the communique, the troop contributing countries, UNMISS and the Transitional Government have agreed to continue working on the modalities of deployment, and to build upon the consultations that have been taking place in recent months.

The Council has, in its recent resolution, expressed grave alarm over the security situation and the ongoing violence in the country, as well as the dire humanitarian consequences for the people of the country.

According to the Minister, the Transitional Government has committed to devising a plan on concrete steps to remove impediments to UNMISS' ability to implement its mandate. This plan is expected by end of September 2016, he said,, explaining that such steps would include a review of procedures related to movement of UNMISS and streamlining the bureaucratic processes.

UNMISS on the other hand has committed to inform the Government about the movements and of any other details.

The communique further states that the Transitional Government has expressed its readiness to implement chapter 5 of the agreement on the resolution of the conflict in South Sudan, and would work with African Union in setting up the hybrid court for South Sudan. 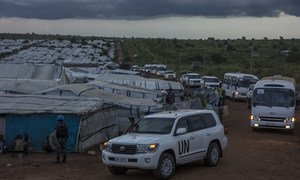 On the second day of its visit to South Sudan, a delegation from the United Nations Security Council today met with displaced people living in camps, known as “protection of civilians” sites, seeing first-hand “the human consequences of the failure of political leaders to bring peace back to their country.”