UNICEF/Miraj
In August 2016, UN agencies provided urgent food items to 75,000 Syrians at the border with Jordan where conditions are very harsh. Jordan sealed the berm area in mid-2016 following an attack at a border post.
2 September 2016

On a visit to northern Jordan today, the top United Nations humanitarian official saw first-hand the conditions that more than 70,000 Syrian refugees, mostly women and children, are having to stay in along the border with Syria – in the middle of the desert, under a blazing sun and with no food or water – amid talks with Jordanian authorities aimed at resolving their plight.

“We [had to fly] in by helicopter so we could see over the whole area and in between two berms are tens of thousands of tents quite sparsely populated compared to a normal organized refugee camp,” the Under-Secretary-General for Humanitarian Affairs and Emergency Relief Coordinator Stephen O'Brien told UN Radio during a telephone call from Jordan.

“You have to imagine… completely out in the middle of desert… in very, very hot [conditions], baking in the tents,” he added.

The UN humanitarian chief is in Jordan in relation to that country's response to the war in Syria, which has seen hundreds of thousands of Syrians flee the conflict into Jordan, including some 75,000 people stranded between the two countries in an area made up of earthen embankments and known as the 'berm.' The living conditions there are dire with no access to basic resources such as food and water.

Jordan, which had already welcomed more than 700,000 refugees from Syria, sealed the area due to security concerns following an attack in June on Jordanian military personnel – before the border closure, UN agencies and partners regularly delivered supplies from the Jordanian side to the people stranded in a 'no man's land.'

So far on his visit, Mr. O'Brien has met with senior government officials to discuss options, keeping in mind humanitarian principles, to help those stuck at the berm.

“Our discussions focused principally on national security concerns and on finding solutions to the Syrians stranded at the north-eastern border,” he said later in a media encounter in the capital, Amman. “For the people at the berm, the Jordanian authorities have facilitated and supported the delivery of humanitarian assistance.”

He noted that that his discussions with the authorities also centred on ensuring that UN agencies and partners from humanitarian and non-governmental organizations which will work in the region are able to do so safely.

Referring to Jordan's provision of more than 20,000 work permits to refugees so that they are able to earn a livelihood, the UN humanitarian chief underscored that this generosity needs to be recognized.

“Jordan serves as an island of stability, hosting the international community, contributing to and enabling us to respond to the hundreds of thousands of vulnerable people fleeing the conflict in Syria,” the UN official said in his media encounter.

Mr. O'Brien also said that the United Nations will be hosting a summit on refugees and migrants on 19 September at its headquarters in New York, and that will be followed by another meeting hosted by President Barack Obama of the United States where world leaders will discuss the issue. He also expressed his hope that there will be an understanding among the world's nations on getting support to the refugees and those displaced due to such terrible manmade conflicts around the globe. 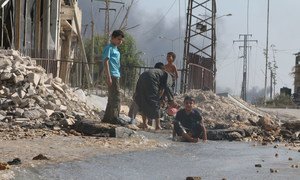