The United Nations Security Council has strongly condemned the recent terrorist bomb attack against the Chinese Embassy in Bishkek, Kyrgyzstan, which caused injuries of Embassy staff, stressing that diplomatic and consular premises must not be violated.

The United Nations Security Council has strongly condemned the recent terrorist bomb attack against the Chinese Embassy in Bishkek, Kyrgyzstan, which caused injuries of embassy staff, stressing that diplomatic and consular premises must not be violated.

In an overnight press statement, the 15-member Council “condemned in the strongest terms the serious terrorist bomb attack,” which took place in the capital on 30 August, while also expressing their deep sympathy to the injured and their families and to the Government of China and the Government of Kyrgyzstan and wishing the wounded a speedy recovery.

The Council stressed the fundamental principle of the inviolability of diplomatic and consular premises, and the obligations on host Governments, including under the 1961 Vienna Convention on Diplomatic Relations and the 1963 Vienna Convention on Consular Relations, “to take all appropriate steps to protect diplomatic and consular premises against any intrusion or damage, and to prevent any disturbance of the peace of these missions or impairment of their dignity, and to prevent any attack on diplomatic premises, agents and consular officers.”

Underlining the need to bring the perpetrators, organizers, financiers and sponsors to justice, the Council urged all States, in accordance with their obligations under international law and relevant Council resolutions, to cooperate actively with relevant governments and authorities in the investigation into the case.

Furthmore, the Council reaffirmed that terrorism in all forms and manifestations constitutes one of the most serious threats to international peace and security, and that any acts of terrorism are criminal and unjustifiable, regardless of their motivation, wherever, whenever and by whomsoever committed.

The Council also reaffirmed the need to combat by all means, in accordance with the Charter of the United Nations and all obligations under international law, including international human rights, refugee and humanitarian law, threats to international peace and security caused by terrorist acts. 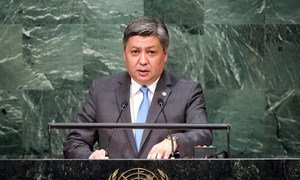 Addressing a range of issues before the United Nations General Assembly today, the Minister for Foreign Affairs of Kyrgyzstan, Erlan Abdyldayev, welcomed the new 2030 Agenda, stressed the right of each State to development and underscored the need to combat terrorism and violent extremism.