WFP/Henry Bongyereirwe
Halima, a South Sudanese refugee carries two of her children in Bidi Bidi refugee settlement in northern Uganda. Having lost her husband in the conflict in South Sudan, she must endure this alone, and depend on the UN WFP for food and nutrition.

Halima, aged 22, is from the village of Yei in South Sudan. Now, though, Yei is only a name, and a distant dream for her and her four children. Bidi Bidi: she will have to get used to that, as the new name for her new home. Bidi Bidi. Besides this name and its new beats, she will learn new names, of new neighbours, too. Her husband is not here with her; he was shot dead two weeks ago, when her village was attacked.

"When the crisis started there was shooting everywhere and people began to run. People were killed,” she says, with the youngest of her four children seated on her lap. And then, in a terse enunciation, quickly says, “They killed my husband.” That set her on a journey that would eventually lead her to Uganda, the location of her new home.

“When I realised my husband was dead, I took the children and fled across the border into Uganda,” she says, recounting the arduous journey that they were forced to undertake, to seek safety. “We went through the forest and we finally got to Uganda."

In their innocent years, her four children will have to make quick adjustments too, and know Bidi Bidi as their home. They will make new friends here, learn new languages, and learn to play new games. Suddenly, for them – as is for Halima, their mother – Bidi Bidi has replaced Yei. Suddenly, she is alone, without her husband. Suddenly, she is a refugee, in a foreign land. 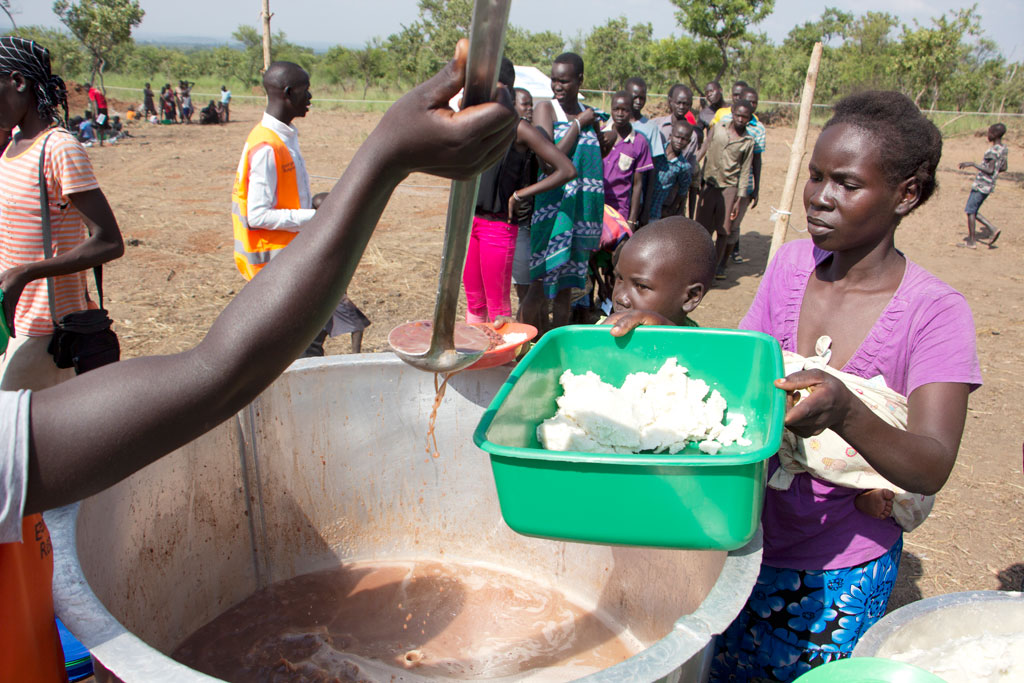 A woman being served a hot, fortified maize meal with beans to share with her children. Like all new refugee arrivals, they will depend on the UN WFP for such meals until they can support themselves, a long time from now. Photo: WFP/Henry Bongyereirwe

Halima’s neighbours are new to Bidi Bidi, too. They recently arrived from different parts of South Sudan- driven away by another bout of conflict in the beleaguered country. For Halima, although safe, Bidi Bidi is not the same as Yei. Bidi Bidi is a refugee settlement. In Bidi Bidi, she has no crop, or livestock produce. In Bidi Bidi, they may not know where their next meal will come from, or when it will come, but someone else does: the United Nations World Food Programme (WFP).

For the new arrivals, their needs are particularly urgent. After a long, gruelling journey across the border, they are hungry. The journeys happen daily, as do the border crossings, in different locations. One such border crossing point between Uganda and South Sudan is Oraba. Here, WFP provides new arrivals with high energy biscuits; this comes in handy before they are transferred to refugee transit centres, or to established refugee settlements, like Bidi Bidi. 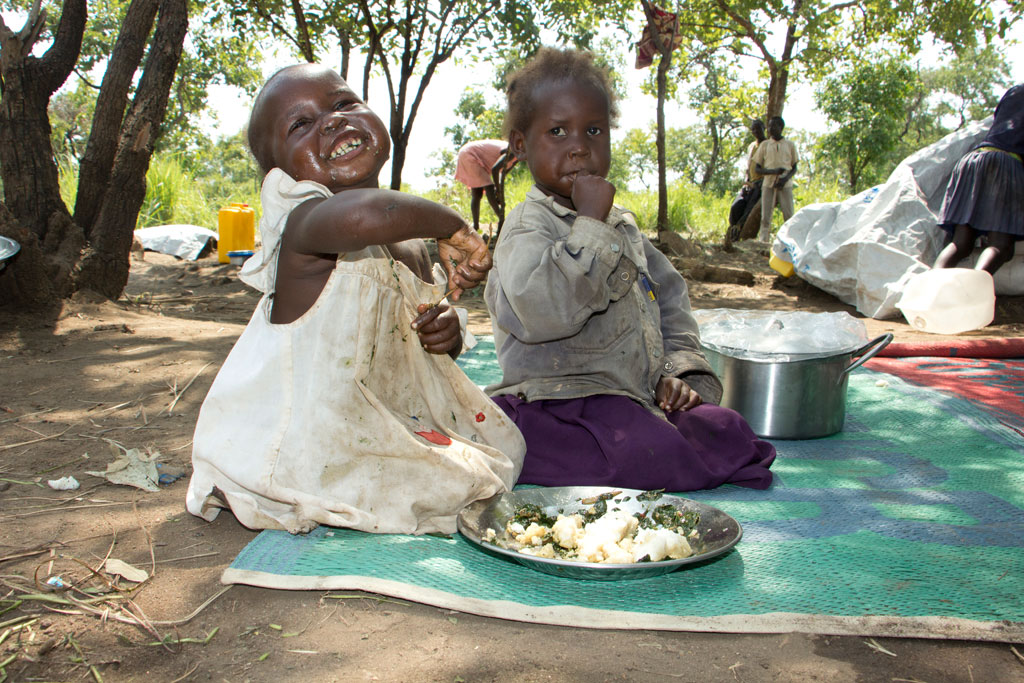 Two children share a fortified maize meal. Such meals, provided by the UN WFP, are crucial for their nutritional needs. Photo: WFP/Henry Bongyereirwe

“Uganda is hosting a record number of refugees, half a million,” says Mike Sackett, WFP Uganda Director, as he oversees the distribution of food rations at the Nyumanzi Refugees transit centre. “They come from Burundi, DRC but particularly from South Sudan which has been affected by very serious fighting initially at the end of 2013 but even as recently as last month,” he adds.

“Since that time,” he says, “75,000 new people have come into Uganda and the World Food Programme is providing essential food rations to them.”

WFP is implementing an emergency operation to assist up to 80,000 South Sudanese refugees who arrived in northern Uganda after renewed conflict in South Sudan. Overall, WFP is assisting close to half a million refugees in Uganda.

To do this, and given severe funding shortfalls, WFP announced recently that it would have to reduce rations for all refugees who arrived in Uganda before July 2015. Refugees who arrived after that date, as well as the particularly vulnerable – the elderly, orphans, and those in need of treatment for malnutrition – will continue to receive a full ration. Cuts are expected to affect about half of all refugees who are dependent on food assistance.

Uganda has been hosting large numbers of refugees through the years. However, the country that has been hailed as the best place for one to be a refugee, is hosting the highest number of refugees in its history: more than half a million. Many of these are from South Sudan, the world’s youngest nation. A new spate of fighting that shrouded the country’s 5th independence anniversary has ejected tens of thousands of its citizens, who now seek refuge in neighbouring countries. According to the UN Refugee Agency (UNCHR), the recent unrest appears to have tipped the scales against an imminent political solution to the South Sudan conflict and exacerbated the refugee crisis.

The agency estimates that more than 100,000 South Sudanese have fled to neighbouring countries, including Uganda and Sudan, since fighting erupted in the capital, Juba, in early July. According to the agency, sporadic violence and worsening food insecurity has been reported in other parts of the country which were previously calm, contributing to the displacement of civilians. 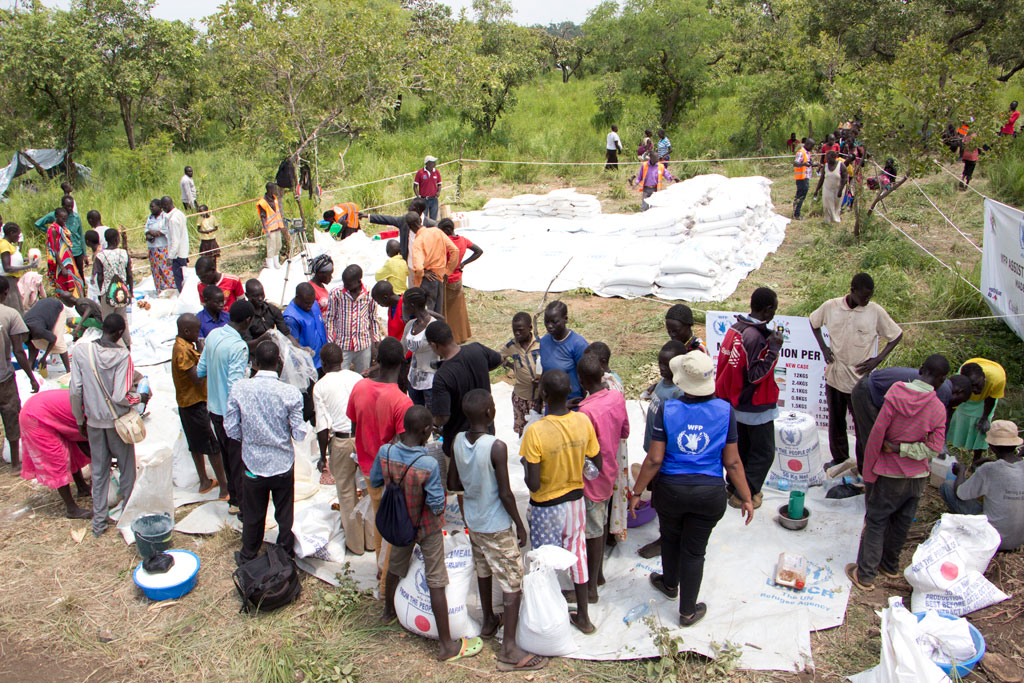 Ninety per cent of those fleeing are women – like Halima – and children; mostly from Juba and other parts of Central Equatoria. In Uganda, the majority of these refugees rely heavily on WFP for food and nutrition assistance – comprising cereals, pulses, fortified blended foods, vitamin-A fortified vegetable oil and iodized salt – until they are able to provide for themselves using land that the Ugandan Government provides for their resettlement. Once they are resettled, WFP provides them with monthly rations or cash assistance depending on location and eligibility criteria.

As it struggles with severe funding deficits, WFP is appealing to donors to provide more support to its operation, which is expected to cost US$7 million per month. This year, the agency has received contributions from Canada, the European Commission, Ireland, Japan, the United Kingdom, the United States and other donors.

For Halima and her four children, these donor contributions mean everything, for their food and nutrition needs. Until she is able to supplement that with her own produce from the land allocated to her by the Ugandan government, humanitarian assistance will remain crucial. For the new arrivals, Bidi Bidi will become their new home, at least until they find another home, or until it is safe enough to return home, in South Sudan. 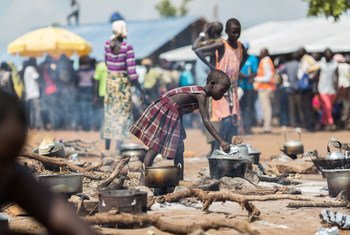 17 August 2016
Appealing to donors to urgently help bolster the humanitarian response in Uganda following an influx of thousands of people fleeing violence in neighbouring South Sudan, the United and the Ugandan Government today announced that they will be forced to halve food rations or cash assistance in Uganda and put priority focus on those refugees most in need.