In his briefing to the United Nations Security Council today, a senior United Nations official emphasized the need for Guinea-Bissau’s political leaders to put aside partisan considerations and focus on national interests and the welfare of the suffering population.

“The ongoing political impasse can and must be resolved,” the Secretary-General’s Special Representative for Guinea-Bissau, Modibo Touré, told the Council.

Mr. Touré, also the Head of the UN Integrated Peacebuilding Office in Guinea-Bissau (UNIOGBIS), further said that the parties to the country’s crisis should make the necessary sacrifices and concessions needed to end a parliamentary standoff and put governmental machinery back on track.

The People’s National Assembly of Guinea-Bissau has been stuck in an impasse for the last few months and it has not yet been able to consider the Government’s programme that had been in place for three months.

Mr. Touré reported that the President of the National Assembly had taken steps aimed at finding a solution to the stalemate, including initiating a mediation exercise between parliamentary groups of the two main parties.

He underscored that without public approval of the Government’s programme, it would be difficult for it to introduce reforms and to implement policies and strategies that promoted economic growth and improved the living conditions of people.

The UN official also noted that in addition to the current focus on achieving stability from the top down, energy and resources should be invested to foster such a development from the bottom up. In that regard, Mr. Touré called on the donor community to consider allocating more resources to the social sector, including health and education and to programmes that empowered women and created opportunities for youth.

He added that breaking the political stalemate should also provide the opportunity for the political actors of the West African country to reflect on ways to end the recurrent cycle of institutional paralysis and ensure sustainable stability. 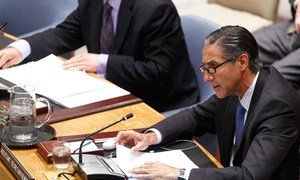