Pollution kills as many people as cancer does, UN’s new environment chief warns

The new head of the United Nations environment agency today laid out key issues facing the international community on environmental issues, including pollution as well as the linkages among the environment, wars and conflicts, and migration.

“The World Health Organisation has estimated that seven million people on the planet are dying from pollution – that is more or less the same number of people dying from cancer,” the Executive Director of the UN Environment Programme (UNEP), Erik Solheim, told reporters in Geneva.

In his remarks, the former Norwegian politician and diplomat flagged the role that partnerships could play in UNEP’s mission, noting that “at the very minimum we will be ready to go into partnerships with companies who either behave well or are ready to change,” and citing a recent agreement in Addis Ababa to look into a partnership with Ethiopian Airlines to find ways to assist the company in achieving the maximum fuel efficiency.

The second issue is “to look into the crossroads between environment and wars and conflicts and migration,” said Mr. Solheim.

To bring greater focus to these priorities, he said, it is necessary to reach out to more people and change narratives to get closer to people’s hearts. As a first step, he is considering changing the organisation’s name from “UNEP” to “UN Environment.”

Mr. Solheim also highlighted how his past experience would help inform him in his new role. As a negotiator of the peace process in Sri Lanka between 1998 to 2005, Mr. Solheim said he had gained valuable lessons, including the importance of dialogue and compromise.

“In my view you should always try to talk even with political leaders as well as guerrilla leaders or terrorists leaders who do not seem to be amendable to compromise – let’s try talking,” he said.

Mr. Solheim was elected to the UNEP position for a four-year term by the General Assembly on 13 May this year, succeeding Achim Steiner of Germany, who led the agency for the past 10 years. 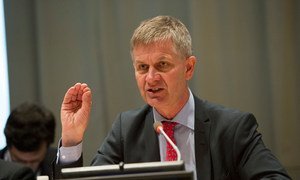