In telephone conversations today with the Gabonese leaders vying for the country’s presidency, United Nations Secretary-General Ban Ki-moon voiced his concerns over early calls on the polls results, outside of any official process.

“The Secretary-General expressed concern about the issuance of premature declarations on the outcome of the election ahead of the official announcement of the results,” Mr. Ban’s spokesperson stated in a readout.

The UN chief spoke with the President of Gabon, Ali Bongo Ondimba, and the presidential candidate of the Démocratie Nouvelle party, Jean Ping, in separate telephone calls earlier on Tuesday. According to media reports, the election was closely contested between the two candidates, with the outcome still pending and provisional results scheduled for release today.

The Secretary-General’s spokesperson said that in the calls Mr. Ban commended the peaceful holding of the presidential election last Saturday, and welcomed the high voter turnout and the presence of a large number of national and international observers.

Mr. Ban also called on the President and Mr. Ping to impress upon their supporters the need to show restraint while waiting for the announcement of the provisional results.

“The Secretary-General encouraged President Bongo Ondimba and Mr. Ping to address any dispute that may arise after the announcement of the results through the existing legal means, following a transparent and democratic process,” the spokesperson added, while also flagging that Mr. Ban reiterated the availability of his Special Representative for Central Africa, Abdoulaye Bathily, to assist in defusing any tensions that may arise.

♦ Receive daily updates directly in your inbox - Subscribe here to a topic.
♦ Download the UN News app for your iOS or Android devices.
gabon 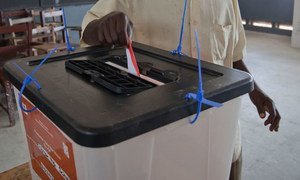 While congratulating the people and Government of Gabon for the holding of a peaceful and orderly presidential election on Saturday, United Nations Secretary-General Ban Ki-moon today also urged all Gabonese to accept the poll results.