The United Nations senior official coordinating efforts towards the peaceful resolution of the Israeli-Palestinian conflict today reiterated a call for both sides to work towards a negotiated two-state solution which envisages the co-existence of Palestine and Israel as amicable neighbours.

“Both sides should work to reverse the negative trajectory, to build trust and to restore hope that a negotiated two-state solution is not just a political slogan but a reality that can be achieved through negotiations in our lifetime,” the UN Special Coordinator for the Middle East Peace Process, Nickolay Mladenov, told the Security Council in his regular briefing on the situation in the region.

The envoy noted that recommendations offered by the so-called Middle East Quartet – the United States, the Russian Federation, the European Union and the UN – on the way forward in the peace process have been ignored, pointing to a surge in Israeli settlement-related announcements and continuing demolitions of Palestinian buildings as an example of this. The Quartet’s recommendations include an end to Israel’s settlement policy and a halt to Palestine’s incitement to violence.

More than 37 years ago, the Security Council determined that Israeli settlements in occupied territory have no legal validity […] That determination was true in 1979, and is equally true and even more urgent of a concern today

In the briefing, Mr. Mladenov recalled that more than 37 years ago, the Security Council determined that Israeli settlements in occupied territory have no legal validity and are an obstruction to achieving a comprehensive, just and lasting peace in the Middle East.

“That determination was true in 1979, and is equally true and even more urgent of a concern today,” he said, urging the leaders on both sides, with support from the region and the international community, to end the conflict on the basis of relevant Security Council resolutions, and in a manner that meets the legitimate national aspirations of both peoples.

He reported that since 1 July, Israel has advanced plans for over 1,000 housing units in occupied East Jerusalem – in Pisgat Ze’ev, Ramot, Har Homa, and Gilo – as well as 735 units in Ma’ale Adumim and other settlements in the West Bank.

Israel has also published tenders, some new, for 323 units in East Jerusalem settlements and reissued tenders for 42 units in Kiryat Arba, near Hebron, he added, for which it also allocated more than $13 million in new funding.

All of these and other plans would essentially create new illegal settlements, and it is difficult to read in such actions a genuine intention to work towards a viable two-state solution, the UN envoy said, calling on Israel to cease and reverse these decisions.

“Let me be clear: no legal acrobatics can change the fact that all outposts – whether ‘legalised' under Israeli law or not, whether located on state land, or absentee land, or private land – just like all settlements in Area C and East Jerusalem, remain illegal under international law,” Mr. Mladenov said.

The Special Coordinator also noted that, according to the UN Office for Coordination of Humanitarian Affairs (OCHA), more than 91 structures across 26 communities in Area C were demolished due to the lack of Israeli building permits in August alone, displacing some 125 people and affecting the livelihoods of at least 2,100 people.

Other topics covered in his briefing included security-related incidents in Israel and the occupied Palestinian territory.

“With no prospect for resuming negotiations in sight, developments on the ground continue to undermine an already precarious situation,” he noted, adding that although the past month has been relatively calm, a number of security-related incidents occurred last week,

These incidents included the apparent extrajudicial execution by the Palestinian Security Forces of a man in custody; the firing of two rockets from Gaza, to which Israel responded by directing some 60 missiles and shells at 30 suspected military installations in Gaza; and the killing by the Israeli Security Forces of a Palestinian man who was reportedly under psychiatric care.

Preparations under way towards October elections

In a positive development however, the UN official said, political parties had signed an electoral code of conduct on 25 July to which all parties and candidates must adhere to in the Palestinian local council elections taking place on 8 October and which are expected to be the first simultaneous polls in the West Bank and Gaza since 2006.

Conducting the local elections in line with established international standards can contribute to advancing Palestinian reconciliation, Mr. Mladenov said, while also underlining that “the lack of unity, however, or any attempt to influence the outcome of the elections, including through intimidation, threats, violence or coercion, risks widening divisions and undermining the Palestinian national cause.”

Turning to Gaza, he said that while progress has been made on reconstructing the physical damage since the ceasefire agreement two years ago, repairing the psychological damage of the conflict is “miles away” from being over. “We need a radical overhaul of how we deal with the problems of Gaza,” he said.

On the issue of the Golan heights, the Special Coordinator said the situations remains volatile and continues to undermine the 1974 Disengagement of Forces Agreement. He flagged that fighting between the Syrian armed forces and armed groups in the areas of separation and limitation is continuing, with several incidents across the ceasefire line being reported.

Mr. Mladenov also drew attention to a nearly $100 million shortfall in the core budget of the UN Relief and Works Agency for Palestine Refugees in the Near East (UNRWA), which would affect the agency’s key services for vulnerable Palestine refugees throughout the region. 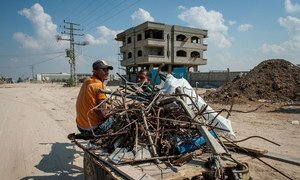 Marking the second anniversary of the 2014 ceasefire which ended the most devastating round of hostilities in Gaza, heads of United Nations agencies there have called for a greater flow of material and funding to address humanitarian needs and boost economic prospects for Gaza's 1.9 million residents.