A senior official at the United Nations rural development agency has stressed the importance of investing in Colombia’s small farmers and rural communities to ensure lasting peace in the country.

“The country now has a historic chance to achieve a lasting peace. The only way to seize this opportunity, however, is to ensure that investments in poor rural people lead to increased agricultural productivity and sustainable rural development,” said Perin Saint Ange, an Associate Vice-President of the International Fund for Agricultural Development (IFAD), in a news release issued by the agency today.

Mr. Saint Ange’s call comes as he is about to undertake a three-day visit to the country shortly after the Colombian Government signed a definitive peace agreement with Revolutionary Armed Forces of Colombia – People's Army (FARC-EP).

The IFAD official also pledged the agency’s support to the Colombian Government’s efforts to reconstruct rural areas now that the 50-year conflict is over.

Highlighting that the peace accord is a massive step forward and that it has created an enabling environment to invest in the country’s rural communities, Mr. Saint Ange said that the UN agency wants to ensure that small-scale farmers and rural entrepreneurs will experience significant improvements in their well-being and prosperity.

“The road is long and much more needs to be done, but there is no doubt that Colombia is on the right path. Both parties to the conflict are clear on the need to reverse the neglect that rural areas have been subjected to in the past,” he said.

Colombia, he added, can count on IFAD’s support to the country’s rural development and thereby, to the peace process, for years to come.

“We want to play our part in building a new, peaceful and prosperous Colombia. We want to assure the Colombian people and authorities that IFAD’s 40 years of experience in rural development is – now more than ever – at their disposal,” he said.

During his visit, the IFAD Associate Vice-President will meet with senior government officials as well as visit an agricultural research centre where he will explore ways of putting innovations developed by the centre to the service of small farmers, not only in Colombia, but in the Latin American and Caribbean region as a whole. 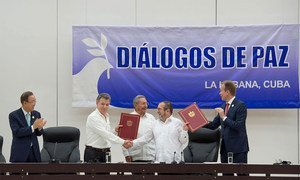