The United Nations envoy for Liberia today stressed the need for long-term, robust engagement by stakeholders, particularly the Security Council, towards a sustainable peace in the West African country.

Briefing the Council, Farid Zarif, Special Representative of the Secretary-General and Head of the UN Mission in Liberia (UNMIL), said many Liberians are concerned about the prospect of the Mission’s withdrawal and potential lack of UN support during the October 2017 presidential and legislative elections.

“There is a consensus among national actors that the next elections will be a critical test for Liberia's stability, democracy and development,” Mr. Zarif said, emphasizing that both the Government of Liberia and the international community must not lose sight of the still arduous path to sustainable peace in the country and the region, which “will require long-term robust engagement by all concerned, particularly by this august Council.”

He began his briefing by applauding the Government of Liberia for the successful completion of the security transition, in keeping with Security Council expectations, and commending the Liberian institutions and international partners for their leadership and commitment which made reaching the “historic” milestone possible.

Mr. Zarif said that following the security transition, the overall situation in Liberia has remained calm, and that UNMIL has been closely monitoring the performance of the security institutions and adjusting its engagement accordingly.

This has also necessitated a review of the nature and form of the future support and cooperation between the Government, on the one hand, and UNMIL and other international partners, on the other, based on the clear lead role of the Liberian actors and continued, recalibrated support from international actors, he said.

Consultations are ongoing between the Government and UN and other stakeholders on the revised institutional framework for such cooperation, he added.

Mr. Zarif warned of the potentially serious consequences of “political wrangling” in the Legislature, such as a delay in adopting the national budget for the 2016-2017 period which includes the financing of the National Elections Commission and preparatory activities, including those related to security for the October 2017presidential and legislative elections.

This should also be viewed against the background of hardening socio-economic environment due to the worsening economic outlook which has prompted the introduction of austerity measures and revising downwards the current year's budget and an 11 per cent decrease in the proposed budget for the next year, he said.

In Liberia, as anywhere else, the prevention of conflict can only be effective in the context of broader social, political and economic transformations, and the respect for the rule of law, he said, expressing concern about the overall lack of progress on addressing the underlying causes of divisions and exclusion in Liberia.

The failure to robustly pursue reconciliation and delays in structural changes, such as land reform and decentralisation, raise a ‘red flag’ about future prospects for peace and security

“The failure to robustly pursue reconciliation and delays in structural changes, such as land reform and decentralisation, raise a ‘red flag’ about future prospects for peace and security,” he said.

Also briefing the Council was Joakim Vaverka of Sweden, whose Permanent Representative to the UN serves as Chair of the UN Peacebuilding Commission’s Liberia configuration.

In May, the Government and the Commission launched the revised Statement of Mutual Commitments on Peacebuilding in Liberia, which outlined priority actions over the next two years, he noted.

The Commission would continue to promote national reconciliation, security sector development and strengthening of the rule of law, and would follow up on conversations with national interlocutors regarding good governance, employment generation, equal treatment of ethnic and religious groups, and on the need to build trust between the security sector and citizens, he said.

In the coming months, he added, the Commission would pay special attention to preparations for the presidential and legislative elections in 2017 by engaging with the National Election Commission and the Governance Commission. By addressing critical factors early, it would aim to ensure that dispute resolution mechanisms were in place and that regular dialogue channels between security forces and the Government were supported.

The Commission also would pay close attention to reconciliation, he said, which the Government had described as a multidimensional process of overcoming social, political and religious divisions; healing physical and psychological wounds from the civil war; and confronting historical and structural wrongs. “This cuts to the core of addressing root causes of conflict,” he said, and the Commission was committed to help in that pursuit.

In the fall, he said, the Council would make important decisions on the future of the UN presence in Liberia. The Commission would provide advice on longer-term peacebuilding needs and priorities and convene a multi-stakeholder forum to discuss peacebuilding priorities. The UN has a responsibility to sustain attention on Liberia during and beyond the Mission’s transition by mobilizing financial and political support. 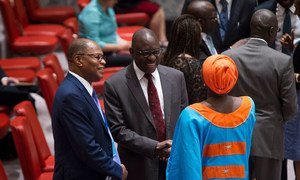 Countries in West Africa and the Sahel must expand intelligence gathering capacities to counter militant threats, such as those posed by Boko Haram, the head of the United Nations operation for that region said today.