“From my recent talks with top leaders in Kosovo, I have the impression that [they] understand the need to place realism and practicality higher on their political agenda,” said Mr. Tanin in his regular briefing to the Council.

“Many have their eyes upon emerging wider trends, and the opportunity these trends offer to seize levers of opportunity, and remove old obstacles, in order to achieve faster progress,” he added.

He recalled his meetings with local officials and communities where he heard their concerns related to employment, public services, and confidence in governing institutions, and in particular, their desire for improved relations and more confidence between ethnic communities, the UN envoy highlighted that it was clear that economic, educational and healthcare issues, as well as the rule of law and combatting corruption, and not interethnic politics are the main concerns of people.

The UN envoy further said that there is a strong emphasis from top Kosovo leaders on regional cooperation, better understanding of the positions of other sides and, especially, the need for the European Union-led Dialogue to be successful.

Wide view of the Security Council during its meeting on Kosovo. UN Photo/JC McIlwaine

He added that Prime Minister Vucic, recently, told him that too much time was being lost, and that more serious, sustained and committed work on the Dialogue is needed from all stakeholders, including the international community.

“The EU-led High-Level Dialogue remains a cornerstone in the road toward reconciliation. It is the EU perspective in the region that continues to be a main driver of reform, particularly in the vital areas of governance, rule of law, and human rights,” he said.

Since his last briefing to the council, Mr. Tanin reported that progress continues to be made in some areas, including the start of the refurbishment of the Mitrovica Main Bridge, as well as the narrowing of differences on the telecommunications issue.

However, he added that more focussed work is clearly needed regarding other agreements, such as the Community/Association of Serb-majority Municipalities.

Assisting the communities affected by the conflict

Mr. Tanin further told the Security Council that focus should be brought back on addressing the issues of the communities affected by the conflict.

“Around 16,000 persons remain displaced within Kosovo, with many more outside. With the elapse of time, many have by now built new lives in their places of displacement,” he noted.

“Yet the voluntary, safe and dignified return of displaced persons is a fundamental right [and] to achieve returns, constructive engagement is needed with returnees and receiving communities, which must be matched by political commitment, but even more importantly, by the commitment of resources,” he added.

The UN envoy said though many people have registered to return, for the return itself to take place, realistic commitments must be demonstrated in allocating the requisite resources and ensuring that the proper conditions are present.

He further noted that despite no large-scale inter-ethnic disturbances or any significant attacks against cultural sites in the last three months, vulnerable groups, in particular among non-majority communities, are subject to higher rates of intimidation.

According to UNMIK, on average around 25 ‘potentially ethnically motivated’ crimes are recorded every month in Kosovo. The primary motives behind such crimes are frequently found to be non-political.

“[However] victims of intimidation always have a different perspective from those who have not experienced it. More sensitivity to this essential truth is needed by authorities from all sides, as well as from ourselves,” Mr. Tanin underlined.

Commending recent steps initiatives of President Thaçi which included visiting and paying respects at a memorial commemorating the killing of Kosovo Serb civilians, he said: “These visits remind us also of the fact that all leaders share a solemn responsibility to do more to help resolve the cases of persons missing from the time of the conflict,”

Stressing that even 17 years after the end of the conflict, over 1,600 persons still remain missing, he said:

“The issue of the missing should not be allowed to slip from the political agenda. The missing will only be found and their fates determined if there is fundamental and sustained commitment by all, including [UNMIK].”

Noting that violent extremism is a major global challenge and that radical Islamist elements and organisers are present in Kosovo, the UN envoy said that despite measures taken by local authorities to mitigate the threat, it is important that everyone is vigilant and aware.

“Kosovo authorities have implemented a strong law enforcement approach concerning those who advocate violence and those who facilitate volunteer fighters,” he said, adding that they have acknowledged that, “this can only work when it goes hand in hand with a developmental approach which effectively targets the specific socio-economic drivers of extremism in Kosovo.”

Mr. Tanin stressed that there is an important role to be played by the international community through well-coordinated assistance, including from the UN. 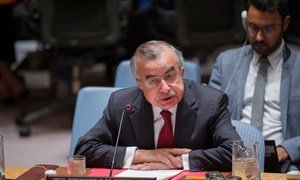 Unemployment, inequality, and the challenges of developing a productive economy to meet global development goals and overcome legacies of impunity, are among the “hard-nosed realities” facing Kosovo, the head of the United Nations political mission there said today, calling for international involvement to help Kosovo’s institutions, and the wider region as a whole, overcome such obstacles.