The United Nations World Health Organization (WHO) is ramping up its response in north-eastern Nigeria, where initial assessments have revealed urgent health problems among populations in areas formerly held by Boko Haram insurgents.

“Protracted conflict situations, such as seen in northern Nigeria – and the surrounding Lake Chad basin countries of Cameroon, Chad and Niger – are among the greatest threats to health, globally,” Peter Salama, Executive Director of WHO’s Health Emergencies Programme said in a news release today.

“Not only are they associated with the world’s highest rates of death among children and pregnant women, they can also be breeding grounds for infectious diseases and outbreaks – but are too often neglected by the international community,” he added.

According to WHO, mortality rates are estimated at four times higher than emergency thresholds in some of the 15 local government areas (LGAs) formerly held by the insurgent group. Furthermore, the rate of severe acute malnutrition is estimated to be 14 per cent, measles cases have also been reported in the area, and both the cases of polio reported by the country for the first time in two years were in Borno state. One of the cases is from an LGA that is still inaccessible to health service delivery while the other is from a newly accessible one.

Highlighting the urgency of prompt action, WHO further noted: “The immediate goal […] is to urgently reduce the rates of death and disease by rapidly scaling up life-saving health services.”

The agency said it will work closely with local officials and specialist agencies to address the health risks posed by malnutrition, disease outbreaks, and long-term lack of access to basic health services.

The working environment in the affected areas is extremely challenging

The release further noted that the working environment in the affected areas is extremely challenging and resources and capacities required to meet the enormous health service gaps are grossly inadequate.

Furthermore, insecurity is a major concern, with a number of recent attacks on humanitarian staff by insurgents, and access to the LGAs require military escort over long distances on poor roads.

The working environment is further complicated by the peaking annual wet season and there are forecasts of major floods in the coming weeks.

In response to the situation, WHO has deployed expert staff to the country for emergency operations, coordination, and data management and another team is on the ground in Borno state to help in dealing with the polio outbreak response. The agency has also dispatched emergency drugs and supplies and its emergency operations will be further reinforced by an expanded, experienced response team in coming days.

Additionally, the Government has also launched emergency polio vaccination programmes, with support from WHO and partners. The first round of vaccinations, targeting one million children, will soon be completed.

The agency said the emergency response is built on its long-standing work in the African country, supporting the delivery of vital health services including immunization, maternal, child and neonatal health, and HIV services.

It estimates that the funding needs for the health sector in Nigeria are estimated at about $25 million as part of the overall humanitarian response plan, which is currently being reviewed with partners in light of the latest events.

Much more needs to be done, says senior UN official for Sahel

In related news, Toby Lanzer, UN Regional Humanitarian Coordinator for the Sahel, having just concluded his fifth visit to the north-eastern parts of Nigeria noted “considerable improvements” since his last visit in April, but underscored that much more still needs to be done.

The Sahel is a region spanning across eight African countries – Senegal, Mauritania, Mali, Burkina Faso, Niger, Nigeria, Cameroon and Chad – many of which are dealing with a volatile security situation.

Noting the recent re-emergence of polio in Borno state, Mr. Lanzer said: “The re-emergence […] is another blow to the people of the region and a challenge for the authorities and aid agencies, alike.”

“Our stated purpose is to meet people's needs and I have no doubt that, together with an increasingly engaged donor community, much more good work must and can take place,” he added.

He further stressed that they key for sustainable peace is addressing the abject poverty in the region and said that continued security and a greater engagement by civilian authorities and development and environment organizations is vital.

“Re-establishing security in all towns and across the rural expanse is crucial to enable people to farm, tend to their livestock and trade,” he said.

“Building on people’s will, energy and resilience is the best way of ensuring a safer and more prosperous future for the people of Nigeria and the neighbouring countries of Cameroon, Chad and Niger,” concluded Mr. Lanzer. 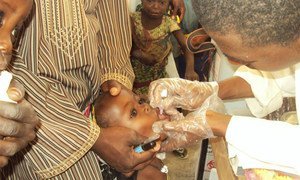 After two children were paralyzed by polio in Borno state in north-eastern Nigeria, the first cases of wild poliovirus in more than two years, the United Nations health agency today stressed the need to prioritize immunization of children in hard-to-reach areas such as the Lake Chad region, spanning several countries and often affected by conflict.