UNHCR/Olivier Laban-Mattei
Nigerian refugees leave their camp in Ngouboua, on the coast of Lake Chad, in this image from February 2015.
19 August 2016

The United Nations refugee agency said today that it is increasingly alarmed at the unfolding situation in north-east Nigeria where the advancing military campaign against Boko Haram has exposed “catastrophic” levels of suffering among a population outside humanitarian reach over months or years.

“While many areas are still beyond reach, in Borno and Yobe states, the picture of suffering is shocking,” Adrian Edwards, a spokesperson for the Office of the UN High Commissioner for Refugees (UNHCR), told reporters in Geneva.

He said that numerous reports of human rights violations, including deaths, sexual violence, disappearances, forced recruitment, forced religious conversions, and attacks on civilian sites, have been received. Some 800,000 additional internally displaced people have been identified as needing help.

“Severe malnutrition on a wide scale is being reported, and the needs are growing with each day,” he said, noting that in Borno state, 51,474 people are on the refugee agency’s critically vulnerable list, 21,912 of these being children – more than three quarters of whom have lost one or both parents.

An additional displacement complication has arisen from the knock-on effect of the military activity and the resulting further spread of insecurity to the north and west across the borders and into parts of Cameroon, Chad and Niger. The violent attacks against military personnel in the town of Bosso in south-eastern Niger on 3 June resulted in the worst displacement there since the beginning of the crisis in 2013.

Amid this, some 106,000 Nigerian refugees have been pressed back into homeland, with Borno receiving 67,000, Adamawa 22,000 and Yobe 17,000. These people, who became new internally displaced people in the process, need reception, registration and other protection help, plus shelter, psycho-social support and material assistance, Mr. Edwards said.

UNHCR is responding by scaling up its operations, he said, explaining that the immediate focus is the needs of some 488,000 highly vulnerable people in critical condition and now concentrated in ten newly liberated local government areas in Borno state, as well as the needs of the returned refugees.

The insurgency in northeast Nigeria has mutated into a vast regional crisis confronting Nigeria and its three Lake Chad Basin neighbours – Chad, Cameroon and Niger. Insecurity has driven more than 187,000 Nigerians across the border, but incursions by Boko Haram into the surrounding countries have generated growing numbers of internally displaced people too. There are 157,000 internally displaced people in Cameroon, 74,800 in Chad and over 127,000 in Niger.

As of the most recent available date there are 2,066,783 internally displaced persons in Nigeria. 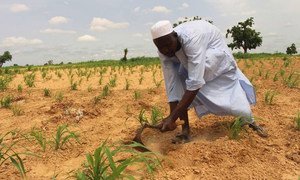