UNICEF/Wathiq Khuzaie
Holding a 13-day-old infant, an elderly Yazidi woman who fled Sinjar Mountain, re-enters Iraq from Syria, at a border crossing in the town of Peshkhabour in Dohuk Governorate.

18 August 2016
A new United Nations report lays bare the widespread and systematic manner in which the Islamic State of Iraq and the Levant (ISIL, Da’esh) has committed “terrible atrocities” against the Yezidi and other ethnic and religious communities, the UN envoy for Iraq said today, calling for the perpetrators to be fully and properly held to account.

Compiled by the UN Assistance Mission for Iraq (UNAMI) and the Office of the UN High Commissioner for Human Rights (OHCHR), the report details heart-wrenching testimony of Yezidi survivors of ISIL atrocities in Iraq since the attack on Sinjar in August 2014, including accounts of systematic and widespread killings, sexual violence and sexual slavery, cruel, inhuman and degrading treatment, forced conversions and forced displacement, among other abuses of international human rights and humanitarian law.

The report contains accounts of those who were among the 308,315 mostly Yezidis who fled Sinjar District. An estimated 360,000 Yezidi remain displaced, with a serious lack of badly needed psychological care.

According to a press statement women interviewed by the UN spoke of being sold multiple times and having their young children and babies snatched from them. One woman told how she was sold to a 26-year-old Syrian ISIL member who raped her regularly for at least 15 days, threatening to kill her daughters if she did not submit.

Another woman was bought and sold to six successive men. She managed to rescue her seven-year-old daughter from the man who tried to abduct her, and tried to keep her safe by cutting off her hair and eyelashes, putting the child in a diaper and telling her to pretend to be mentally ill. However, in spite of this, an ISIL member tried to rape her daughter, driving the woman to attempt to kill her daughter and herself in despair. She eventually escaped with the help of a smuggler.

The report contains many accounts of men being separated from women, and of the mass killings of the captured men. In one instance, up to 600 men were reportedly killed in Tel Afar District. In other instances, members of the Yezidi community were forced to convert to Islam or be killed.

Special Representative and Head of UNAMI Ján Kubiš said the report also notes that approximately 3,500 women, girls and some men, predominantly from the Yezidi community but also a number of other ethnic and religious communities, remain in ISIL captivity.

“Two years after the fall of Ninewa, the Yezidi community continues to be targeted by ISIL. Thousands of men, women and children have been killed or are missing, or remain in captivity where they are subjected to unspeakable sexual and physical abuse,” Mr. Kubiš said, adding: “Faced with such evidence, it is of paramount importance that the perpetrators of these heinous acts are fully and properly held to account.”

For his part, UN High Commissioner for Human Rights Zeid Ra’ad Al Hussein said the testimony recorded in the report must serve as a clarion call to all members of the international community that “no effort must be spared in ensuring accountability for these terrible crimes and to send a clear message that no one may perpetrate them with impunity.”

“I am profoundly concerned at the grave impact that the current conflict is having on civilians, particularly on people from Iraq’s ancient and diverse ethnic and religious communities. The experiences recounted by survivors and documented in this report reveal acts of inhumanity and cruelty on an unimaginable scale that constitute a serious and deliberate attack on the most fundamental human rights and are an affront to humanity as a whole,” High Commissioner Zeid said.

The report states that the violations and abuses committed by ISIL may amount to war crimes, crimes against humanity and genocide.

“Every effort must be undertaken by the Government of Iraq and the international community, in strict compliance with applicable international humanitarian law and human rights law, to put an end to the human rights abuses being perpetrated by ISIL and to secure the safe release of these civilians,” the report states.

“Psycho-social, medical and other forms of support are urgently required, notably for the survivors of sexual violence and sexual slavery. Furthermore, everything feasible must be done to create safe, dignified conditions for the Yezidi, along with [internally displaced persons] from other communities, to return to their places of origin,” it adds.

Allegations on oil-for-food will be probed ‘very seriously,’ Annan says 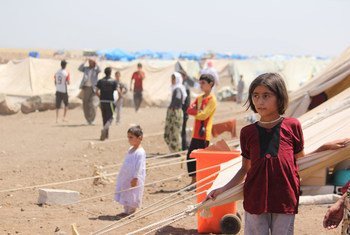 16 June 2016
The Islamic State of Iraq and Al-Sham (ISIS) [also known as ISIL and Da'esh] is committing genocide against Yazidis that amounts to crimes against humanity and war crimes, a United Nations-mandated human rights inquiry reported today.