The head of the United Nations agency tasked with defending press freedom today condemned the killing of a Kurdistan TV cameraman on 14 August, the second such murder in Iraq in a week, urging measures to improve the safety of journalists in the country.

“I condemn the killing of Mustafa Saeed,” Irina Bokova, Director-General of the United Nations Educational, Scientific and Cultural Organization (UNESCO), said in a statement.

Mr. Saeed was killed while covering fighting in the Iraqi city of Mosul.

His death is “a tragic reminder” of the responsibility shared by all to respect the civilian status of war reporters in keeping with the Geneva Conventions, Ms. Bokova said, stressing the need to protect the media as it facilitates the free flow of information, which takes on vital importance in times of crisis or conflict.

On 13 August, Widad Hussein Ali, a freelance reporter and news website journalist, died in an incident of suspected murder in Dohuk, a city in the Kurdistan Region of Iraq.

According to the UN Iraq, his body was found, hours after being abducted, unconscious on the side of a road with severe head injuries, bruising and other serious wounds that displayed strong signs of severe beatings and other forms of ill-treatment. Mr. Ali's died in a hospital and police immediately launched a murder investigation.

UN official condemns killing of journalists in Afghanistan and Brazil 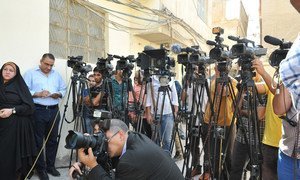 The United Nations in Iraq has strongly condemned the death of a journalist who was seized by armed men in Dohuk city on 13 August and has called on the government of the Kurdistan Region of Iraq to implement urgent measures to guarantee the safety of all journalists and media professionals.