These diseases, including heart disease, stroke, cancer, diabetes and chronic respiratory diseases, and injuries are responsible for 43 million deaths each year – almost 80 per cent of all deaths worldwide, according to a news release from the UN health agency.

“I am honoured to become WHO Global Ambassador for Noncommunicable Diseases and excited about the possibilities that are within our reach,” said Mr. Bloomberg, noting that cities and countries around the world are making great progress reducing preventable, premature deaths.

“Michael Bloomberg is a valued partner and has a long track record of supporting WHO in the areas of tobacco control, improving data for health, road safety and drowning prevention,” said WHO Director-General Margaret Chan, emphasizing that his appointment will help strengthen global response to the major public health challenges of NCDs and injuries.

In his new role, Mr. Bloomberg will work with national and local political leaders around the globe to highlight the burden of NCDs and injuries. His track record on public health achievements as mayor will enable him to motivate cities to take on the global agenda for NCD and injury prevention. He will help mobilize national and city level political leaders, donors and the private sector to prevent and treat the NCD epidemic and combat injuries.

Through this work, Mr. Bloomberg and WHO will be supporting the attainment of the UN’s Sustainable Development Goals (SDGs), which contain a number of specific targets for NCDs and injuries. 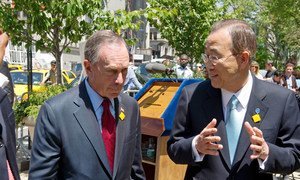