MONUSCO/Sylvain Liechti
A member of FIB stands guard in the Beni region of the Democratic Republic of the Congo (DRC) where the UN backed the FARDC in an operation (March 2014).
15 August 2016

United Nations Secretary-General Ban Ki-moon joined his envoys from the Great Lakes Region and the Democratic Republic of the Congo (DRC) today in strongly condemning the killing of dozens of civilians during an overnight attack in Beni, located in restive eastern part of the country, where the UN mission and national authorities have now deployed forces in the wake if the incident.

“The Secretary-General is appalled by reports of the killing of at least 36 civilians on 13 August in the area of Rwangoma village, North Kivu province of the DRC, by suspected members of the Allied Defense Forces (ADF),” said a statement issued by his spokesperson.

“[Mr. Ban] condemns in the strongest terms this latest attack in the Beni area where, since October 2014, several hundred civilians have been killed by suspected members of the ADF,” the statement continued, extending the UN chief's condolences to the families of the victims and to the Government of the Democratic Republic of the Congo.

The Secretary-General in his statement went on to call for those responsible for this attack to be brought to justice. He reiterated the commitment of the UN to support the authorities of the DRC in their efforts to address the threat posed by armed groups and end impunity, in line with the mandate of the UN Organization Stabilization Mission in the DRC (MONUSCO).

Earlier in the day, United Nations Special Envoy for the Great Lakes Region Said Djinnit also strongly condemned the attack, referring to the incident as a “massacre.”

“We also encourage […] the authorities of the DRC and MONUSCO to increase their cooperation in addressing the scourge of armed groups in eastern DRC in general and Beni, in particular,” he added.

At least 36 people were killed in the attack which took place overnight on 13 and 14 August. The attack is believed to have been carried out by the ADF, a rebel group of Ugandan origin, operating mainly in eastern DRC.

Additionally, in a press release issued earlier today, the Special Envoy noted that “[The] attack will not deter from the collective determination to neutralize all negative forces that continue to cause sorrow and atrocities in eastern DRC.”

Mr. Djinnit added that the attack is a reminder of the urgency to implement the commitments of the Peace, Security and Cooperation (PSC) Framework, and the decisions taken in that regard by the Heads of State of the region.

According to the press release, the Special Envoy also reiterated his readiness to continue to support ongoing efforts to end the plague of negative forces in the region, together with other representatives of the “guarantors” of the PSC Framework agreement.

Mr. Djinnit also expressed his condolences to the Government and people of the DRC on the deadly incident.

For its part, MONUSCO strongly condemned the killings as an act of barbarism, noting that reports indicate that 31 victims were brought to Beni town, while 5 victims were reportedly buried at the scene of the attack.

MONUSCO, in cooperation with the national forces, known by the French acronym, FARDC, and the national police, deployed forces throughout the territory of Beni to contribute to the protection of the population and prevent further attacks.

Joint patrolling is under way and a senior MONUSCO delegation was expected to fly to Beni today to express support to the national authorities in addressing the situation. 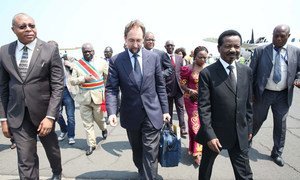 United Nations High Commissioner for Human Rights Zeid Ra’ad Al Hussein today said that the denial of visa to a human rights researcher in the Democratic Republic of the Congo is a regrettable development.