MONUSCO/Myriam Asmani
High Commissioner for Human Rights, Zeid Ra’ad Al Hussein (centre), on a visit to the Democratic Republic of the Congo (DRC) in July 2016.
12 August 2016

United Nations High Commissioner for Human Rights Zeid Ra’ad Al Hussein today said that the denial of visa to a human rights researcher in the Democratic Republic of the Congo is a regrettable development.

“[This] does not bode well for civil society space in the run up to the presidential elections,” said Mr. Zeid, according to Ravina Shamdasani, a spokesperson of his Office (OHCHR).

Last month, the High Commissioner visited the country and had commended its efforts to strengthen human rights. But he also cautioned that some of advances the African country had made may be under threat, especially what he saw as repression against opposition parties in the upcoming elections.

Furthermore, according to the spokesperson, Mr. Zeid was “reassured” by Government officials of their commitment to open up the democratic space, particularly with the President calling for an inclusive national dialogue.

However, the recent denial of visa to the researcher working with the international human rights non-governmental organization, Human Rights Watch, has casted a doubt over the depth of the Government’s commitment, added Ms. Shamdasani.

Noting that it is essential for external observers to be able to work freely to present an independent picture of the human rights situation in the Democratic Republic of the Congo without fear of reprisals.

“We urge the Government to promptly review its decision to deny the visa,” she concluded. 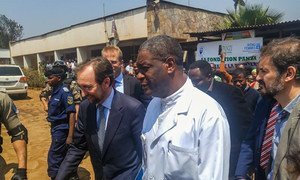 Concluding a four-day mission to Democratic Republic of the Congo (DRC), the United Nations High Commissioner for Human Rights, Zeid Ra'ad Al Hussein, today commended the country's efforts to strengthen human rights but cautioned that some of these advances may be under threat, especially what he saw as repression against opposition parties in the coming elections.