UNICEF/Al-Issa
In the Syrian Arab Republic, an extended family takes shelter under a makeshift tent on the sidewalk after the latest wave of attacks.. The grandfather is wheelchair-bound. The children prepare a fire for cooking and hang out clothes to dry.
12 August 2016
Peace and Security

Along with colleagues, he recently took part in a 37-hour visit to the town of Qamishly, in Syria’s northeastern Governorate of Hassakeh, where WFP is running an airlift operation to deliver food assistance for 200,000 vulnerable people. Since the airlifts began on 9 July, WFP has completed 50 flights, transporting enough food for 170,000 people.

The day after Kern’s trip, an ISIS truck bomb attack in the town killed at least 50 people.

His words below were intended for his personal diary, based on notes jotted down during the journey, were originally meant for keeping in touch with friends and family. He has shared them publicly to help shed light on the conditions for families in Qamishly.

Arrived in Qamishly at 0400, after flying over pitch-dark central Syria, ISIS territory. After three hours of sleep in a noisy guestroom above the office, I had breakfast with the 30 WFP staff working here in this remote outpost, cut off by ISIS, and with no access to neighbouring Turkey and Iraq. Among the team, the stress shows here and there, the stories they hear from the people in the shelters and camps leave a mark. But they are committed, and deeply care about the people here.

Visited a food distribution site by one of our partners. It’s already 37 degrees Celsius and the women are sitting on chairs in the shade waiting for their turn to get the 50 kilogram family food box that will last a month. Usually we support 275,000 people here but now there is no road access and we can only fly in enough for 55,000 so far, so single women and widows with children, those who are internally displaced, orphans, elderly and disabled people are getting food this time.

Talking to them about how they coped without our food for seven months, the answer: borrow from friends and family, sell whatever assets we have left, send my children to work on the fields to earn money, get by without eating any bread for months and so on. The women I speak to look 70 years old, but I’m told they’re around 50, their hands rough from hard work.

We stop at a shelter for families who have fled from Deir Ezzor, the besieged city in the south where WFP has dropped food from high-altitude using parachutes every day since April. This shelter is in the remains of a housing project, half-finished since the war broke out. Windows all boarded up with bricks to avoid sniper attacks and to keep the cold or heat out. 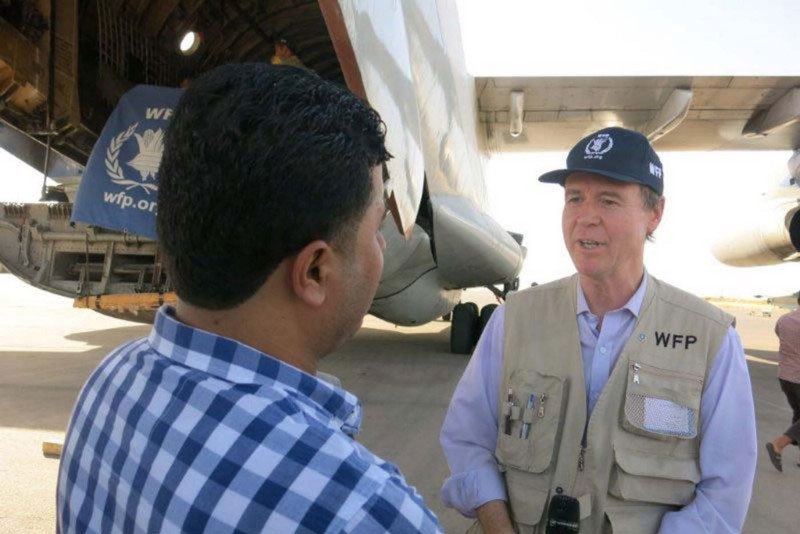 WFP Syria Country Director Jakob Kern speaks with a local journalist at Qamishly airport after the arrival of an airlift of WFP food and non-food items. The airlifts began on 9 July and the aim is to bring food for 150,000 people. WFP/Hiba Anty

The shelter is run by one of our partners, the Syrian Arab Red Crescent Society. Dozens of families live in a three-storey apartment block, two families share one room. The few belongings they could take when they fled are piled neatly along the wall. I see a lonely doll sticking out of a bag. No food in the corner used as a kitchen, just cooking utensils.

The people who live here gather around and then they start talking, and crying, and the stories they tell us are filled with horror: constant running from ISIS, medical problems, death and despair. It makes us cry too, for we feel helpless in this grief and misery. One woman brings tissues for all, a gesture of hospitality in a world of war and cruelties. 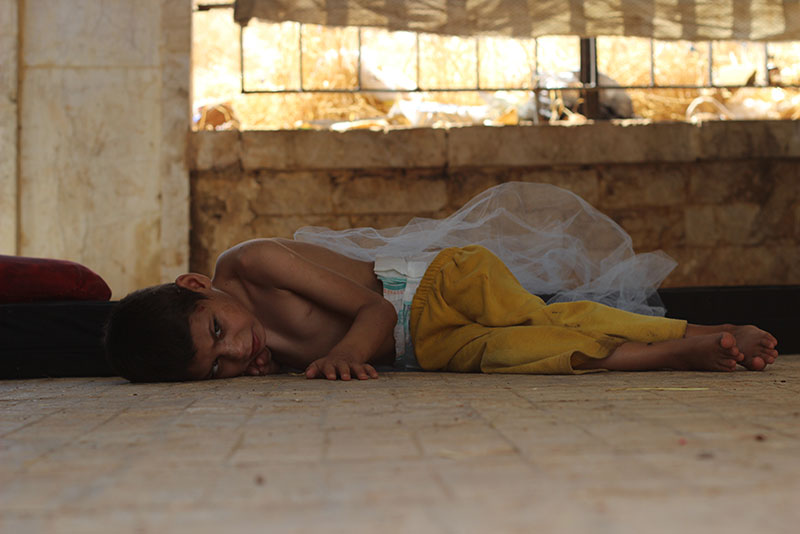 A child with spinal muscular atrophy who needs special medical care, now lives on the streets of western Aleppo city, after fleeing with her family from attacks and intense fighting. UNICEF/ Al-Issa

Souaad from Deir Ezzor left the besieged city a few months ago with her husband and her son, paid USD 2,000 from the last money she had to get them on a helicopter to go to Raqqa further north just to find out a few weeks later that ISIS had come there too.

They beheaded her son in front of her, and she and her husband, who shows us a tennis ball-sized tumour on his side, run again, this time to Qamishly, where they ended up in this shelter. She cries and asks us: What is the future for us, where will we go from here?

One woman gives me her hand-knitted wool purse (not before she takes out the 500 Pounds, about USD 1), as a sign of gratitude for the food assistance WFP is providing, and I think it is probably more for listening to her story. The worst side of a war shows in its victims: the women, children, elderly, sick. And I feel I cannot do much to help them. 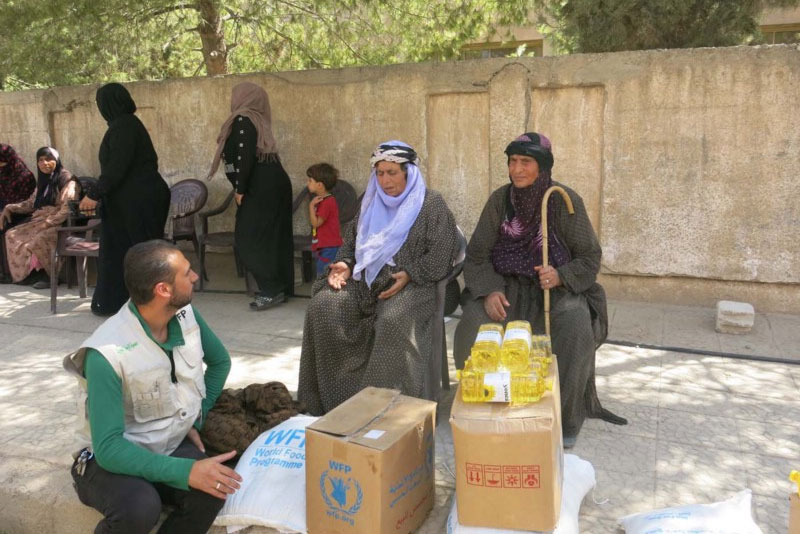 Widows in Qamishly, who have received WFP food for the first time in more than six months, speak with a WFP programme officer. The majority of the women at the food distribution have been displaced multiple times because of conflict, often fleeing with nothing. WFP/Hiba Anty

WFP started an air operation on 9 July and we are flying in food twice a day with a big old cargo plane. At the airport, I watch the offloading of the WFP-contracted cargo plane, this time bringing 40 tons of food and tents. It’s 45 degrees Celsius in the shade under the wings, and at least 55 C out on the tarmac.

On the side of the plane, a sign reads ‘Antarctic Logistics and Expeditions’. I stare at it for a long time but it does not make me feel any cooler. In the distance we hear a car bomb blowing up at the border post, smoke is rising, a reminder that nowhere in Syria can you feel completely safe.

During the day I got news that my flight back to Damascus had been cancelled and there will be no flight tomorrow at all. Then, they got me a last-minute seat on Syrian Airlines departing at 2300 tonight. It gets delayed by more than 3 hours, then finally the boarding signal. No assigned seats in this old plane, and no seat belts either.

The first two rows face each other with a table in between, just like in a train; I’m told this used to be business class. I arrive in Damascus at 0400, too late to drive back through sniper alley, so I spend three hours in the rundown airport hotel.

I sleep with the door open: rooms have no keys because the electronic key cards, from the US, cannot be imported any more, and after so many years they have lost most of them. Finally back in the office at 0800, 37 hours after I left. Just heard there was a big truck bomb in Qamishly this morning, thankfully nobody from our team is hurt. Thinking of all the people I met on this trip.

The United Nations Emergency Relief Coordinator warned the Security Council today that as the Syrian civil war grinds on and millions of desperate people remain cut off from aid, “the humanitarian situation remains bleak, and will continue to be bleak, unless we are granted full and unhindered access, through the most efficient and direct means.”