‘A political solution is the only solution,’ UN says, as rising violence deepens crisis in Yemen

The United Nations today sounded the alarm over a spike in violence in crisis-torn Yemen, as the world body’s human rights wing reported the number of civilian casualties in the conflict has been “steadily mounting,” with some 815 casualties since April alone.

“The people of Yemen continue to bear the brunt of the suffering as a result of the inability of the parties to find a political solution to a conflict that has been raging for more than a year and a half. The return to full-scale hostilities only drives humanitarian needs further,” said Jamie McGoldrick, the UN Humanitarian Coordinator in Yemen, in a statement, adding: “A political solution is the only solution to this crisis.”

According to the UN Office for the Coordination of Humanitarian Affairs (OCHA), local media has reported that ground fighting and air strikes have killed and maimed children and women, and destroyed homes and markets, particularly in the capital, Sana’a, and its governorates, Sa’ada, Taizz, and Al Hudaydah.

Mr. McGoldrick pointed out that the depletion of foreign currency reserves in the Central Bank has made it difficult for importers to obtain lines of credit – “making it nearly impossible for Government entities to maintain basic social services.”

By example, the Humanitarian Coordinator noted that 40,000 cancer patients throughout the country would no longer receive the medication they required because of banking restrictions that impeded their import.

“Humanitarians have been called on, once again, to fill the gap in the provision of basic social services, increasing the need for greater resources from the international community,” he stressed.

Mr. McGoldrick called on all parties to the conflict to abide by their obligations under international humanitarian and human rights law and take all necessary actions to protect civilians and civilian infrastructure in their conduct of hostilities.

“The humanitarian community also demands that the parties facilitate safe, unimpeded and sustained humanitarian access to people in need as well as the voluntary movement of civilians to reach humanitarian assistance,” he stressed.

He urged the international community to exercise its influence over the parties to bring about an early and peaceful solution that puts the Yemeni people at the centre – “something all Yemenis deserve.”

Meanwhile, earlier today in Geneva, a spokesperson for the Office of the UN High Commissioner for Human Rights, Ravina Shamdasani, updated the press on the steadily mounting number of civilian casualties in Yemen over the past few weeks.

“Despite the cessation of hostilities, between 11 April and 11 August 2016, we have documented 815 civilian casualties, including 272 deaths and 543 injured. Of these, in just the past week, since 5 August, 49 civilians were killed and another 77 injured,” she said.

Some of the deadliest incidents took place on 5 July, 7 August and 9 August. “On 5 July, eight children were killed and seven injured due to a rocket that landed in the Al Zira’ah Neighbourhood in Marib City. The rocket was allegedly fired from an area controlled by the Popular Committees affiliated with Al Houthis,” Ms. Shamdasani explained.

She went on to say that on 7 August, 16 civilians were killed, including seven children when airstrikes hit two civilian houses in Al Madid village in the Nihm district of Sana’a. Another 24 civilians, including 13 children, were injured and four other houses were partially destroyed.

“The village,” she pointed out “is located some 30 kilometres away from an area of alleged armed confrontations.”

On 9 August, the spokesperson stated: “An airstrike hit Al Khafifa food factory in the Al Nahdhah district of Sana’a, killing 10 civilians, including three women who worked in the factory. Another 13 factory workers were injured, with some having spent hours under the rubble before the rescuers managed to pull them out. The factory stands adjacent to a military camp.”

On 5 August, a journalist was reportedly struck by two shells launched by the Popular Committees affiliated with Al Houthis.

At the same time, the UN Special Envoy for Yemen, Ismail Ould Cheikh Ahmed, strongly condemned the increasing violations to the cessation of hostilities, calling the breaches “unacceptable and not conducive to the peace process.”

He urged the parties to speed up their efforts to find a comprehensive, political solution to the conflict.

“We remain fully committed to bringing peace to Yemen, but the process requires good faith and concessions from all sides,” said the Special Envoy. “The cessation of hostilities is ongoing, yet each violation negatively affects the Yemeni population,” he said calling on all parties “to show restraint and refrain from any action which undermines efforts to bringing about a peaceful, political solution to the conflict.” 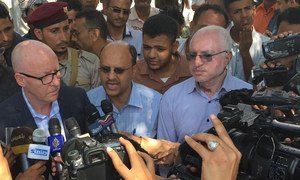 Extremely concerned by reports of rising tensions in Yemen’s Taiz governorate, the United Nations Humanitarian Coordinator for the crisis-gripped country has called for a “humanitarian pause” to protect civilians.