UNICEF/Panadda Srikotcha
A beach in the Katoo District, province of Phuket in Thailand.
12 August 2016

United Nations Secretary-General Ban Ki-moon has condemned the bomb attacks in Thailand that took place on Thursday and Friday, expressing hope that the perpetrators will be quickly brought to justice.

United Nations Secretary-General Ban Ki-moon has condemned the bomb attacks in Thailand that took place on Thursday and Friday, expressing hope that the perpetrators will be quickly brought to justice.

“The Secretary-General extends his condolences to the families of the victims and wishes those injured a speedy recovery. He expresses his sympathies to the Government and people of Thailand,” said a statement issued by Mr. Ban's spokesperson.

According to media reports, within a 24-hour period over Thursday and Friday, several bombs exploded in the resort town of Hua Hin, while several blasts hit the island of Phuket, a top tourist destination.

On behalf of the international tourism community, the UN World Tourism Organization (UNWTO) joined Secretary-General Ban in conveying heartfelt condolences and sympathy to the families and friends of the victims and to the Thai people.

“Thailand is one of the most consolidated tourism destination in the world. A destination where people of all cultures unite and enjoy tourism and its strong potential to foster development, said a separate statement from UNWTO Secretary-General, Taleb Rifai.

The agency expressed full confidence that this will continue to be the case and it looks forward to meet in Bangkok on 27 September for the official World Tourism Day celebrations.

“More than ever, we need to work together to make a great success out of the celebrations of World Tourism Day, this will be the best expression of support and union against these hideous acts,” said Mr. Rifai. 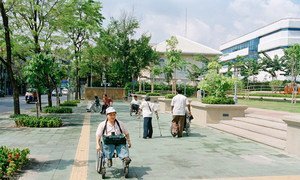 United Nations Secretary-General Ban Ki-moon has reaffirmed the UN’s readiness to support Thailand as the country prepares to vote on a final draft Constitution.