Denouncing a new law in Maldives as a “direct attack” on free speech, a United Nations human rights expert warned today that elements of the bill, such as the vague use of religion, social norms and defamation as reasons for punishing expression, contradict not only international norms, but also obligations set out in the country’s own Constitution.

“Criminalizing speech on such vague and broad grounds as set out in the Bill is a direct attack on the exercise of the right to freedom of expression in the Maldives,” David Kaye, UN Special Rapporteur on the promotion and protection of the right to freedom of opinion and expression, said today in a news release issued by the Office of the UN High Commissioner for Human Rights (OHCHR).

“Freedom of expression is a fundamental right and any restrictions on it must be narrowly and objectively defined, not a matter of common routine,” he stressed.

On 9 August, the country’s Parliament adopted the ‘Protection of Reputation and Good Name and Freedom of Expression Bill,’ which criminalizes speech deemed to be defamatory, to comment against ‘any tenet of Islam’, to ‘threaten national security’ or to ‘contradict general social norms’.

Those committing an offence under the bill can face fines, and failure to pay, will result in jail sentence of three to six months.

Mr. Kaye further added that the broad grounds for restrictions in the Bill contradict not only international human rights standards recognised by the Maldives, such as the International Covenant on Civil and Political Rights, but also the its own Constitution, which protects the right to freedom of expression.

“The use of religion as a ground for limiting free speech is particularly worrying,” he cautioned, emphasizing that international human rights law protects individuals from discrimination and violence based on their religion or belief, but it does not protect religion or belief from comment or criticism as such.

The Special Rapporteur also expressed that the Bill will have a “strong chilling effect” on media and civil society, making reporting and criticism truly risky.

“The threat of additional penalties for the media are likely to lead to even greater self-censorship on issues perceived to be sensitive, limiting public debate on issues of public interest and depriving society from accessing important information on sensitive affairs,” said Mr. Kaye.

Noting that he would be eager to engage in discussion with the Maldivian authorities on the law, the rights expert expressed hope that “the President will reverse the decision by sending back the bill to Parliament for further review in consultation with independent institutions, journalists, civil society organisations and human rights defenders and bring it in compliance with international human rights standards.”

They had also co-signed a letter to the national authorities detailing their concerns about the legislation on 26 May 2016.

Special Rapporteurs are appointed by the UN Human Rights Council to examine and report back on a specific human rights theme or a country situation. The positions are honorary and the experts are not UN staff, nor are they paid for their work. 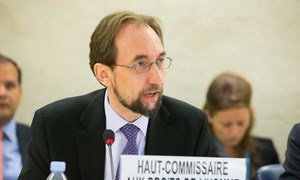 The United Nations human rights chief has voiced concern over a judgement issued by the Maldives Supreme Court in which the country’s human rights processes appear to be severely challenged.