An estimated 60 per cent of Colombia’s alluvial gold exploitation – through mining streams or riverbeds, often dredged with heavy machinery – is not established within existing normative frameworks and in many cases finances and strengthens organized criminal groups, according to a joint United Nations and Colombian Government study.

A recent news release on the study, carried out by the UN Office on Drugs and Crime (UNODC) together with the Colombian Ministries of Justice and Law, Mines and Energy, and the Environment, also provided evidence that informal gold mining is one of the main drivers of deforestation in the South American country.

Among other findings, the report shows that in 2014, some 78,939 hectares (ha) of land were affected by alluvial gold exploitation at the national level, distributed over 17 of Colombia´s 32 departments. Of this detected area, 79 per cent was concentrated in the departments of Antioquia (located in the central north-west with a narrow section that borders the Caribbean Sea) and Chocó (at the border with Panama). The municipality of Nechí, in Antioquia, represented the most affected area with 6,232 ha, or eight per cent of the country's total.

Furthermore, the report points to a link between alluvial gold exploitation and coca crops, noting that, for instance, in the Caquetá, Nariño and Putumayo departments, more than 80 per cent of the detected gold extraction activities are found in territories affected by coca crops. Bolívar has 45 per cent of this activity in territories affected by coca crops, while in Chocó, Valle and Antioquia this percentage is between 30 and 35 per cent.

The report also warns about the presence of this practice is in special territories within Colombia. In this sense, Afro-Colombian communal lands were the most impacted among the special territories, with 46 per cent of the gold exploitation instances. To a lesser degree, although still warranting attention, the Emberá-Katío indigenous communities (in Chocó and Antioquia departments) were reported to be highly vulnerable to alluvial gold activities.

Through this report – which is the first part of a two-phase study; the second phase of the joint project will examine socio-economic dimensions for measuring the degree of vulnerability of the territory in relationship to this practice – the Government of Colombia and UNODC hope to contribute to a better understanding of alluvial gold exploitation activities in the country, offering objective information that contributes towards the formulation of more specialized public policies regarding this phenomenon. 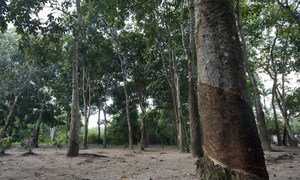 An eight-member grouping of countries working to ensure sustainable development and improve the lives of local communities in South America’s Amazon – home to the world’s largest tropical rainforest – has been hailed as a model for regional cooperation at the tenth session of the United Nations Forum on Forests (UNFF10).