According to a statement issued late yesterday by his Spokesperson’s Office, the Secretary-General welcomed the signing of an agreement between EU and the African Union Commission, in Brussels, Belgium, on 1 August, on the EU’s contribution to the Multi-National Joint Task Force (MNJTF).

“The Secretary-General wishes to take this opportunity to commend the Lake Chad Basin countries and Benin for the significant progress achieved in combating the terrorist threat posed by Boko Haram,” the statement said, adding that Mr. Ban particularly welcomes the enhanced cooperation and coordination by countries of the region, their individual contributions to the Force and the sacrifices made in the fight against Boko Haram.

In the statement, the UN chief reiterated his call on MNJTF countries to ensure that counter-terrorism measures are in full compliance with their obligations under international human rights, humanitarian and refugee laws.

“This is crucial, as Boko Haram is most unlikely to be defeated if the affected communities do not have confidence in the armed forces that are supposed to protect them,” the statement said.

Further in the statement, the Secretary-General encouraged Cameroon, Chad, Niger and Nigeria to consolidate MNJTF operations by re-establishing state authority and resuming social services in Boko Haram-affected areas, as well as creating an environment conducive for the safe and voluntary return, resettlement or local integration of the internally displaced and refugee populations.

The Secretary-General also urged the international community to continue to enhance its support to regional efforts to combat the Boko Haram threat and in mitigating the impact of its activities through the provision of requisite humanitarian, political, financial and logistical support. 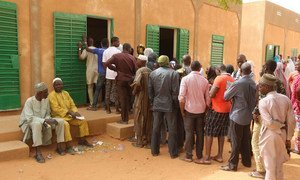 While welcoming recent political developments recently observed in West Africa, the United Nations Security Council today stressed the need to increase military cooperation between the States in the region and Sahel to fight against the terrorist group Boko Haram.