UNHCR/Sebastian Rich
As people continue to flee violence in the northern triangle of Central America – Guatemala, Honduras and El Salvador – UNHCR is supporting asylum-seekers find safety at a series of shelters, including the Tres Angeles Shelter, pictured here, in southern Mexico.
4 August 2016

Through the San Jose Action Statement, the governments of Belize, Canada, Costa Rica, El Salvador, Guatemala, Honduras, Mexico, Panama and the United States vowed to work together to strengthen protection of refugees fleeing Central America, according to the Office of the UN High Commissioner for Refugees (UNHCR).

“It is vital and immensely gratifying to see the countries of the Americas coming together in a regional approach to devise humane, collaborative solutions for people in desperate need of life-saving help,” said UN High Commissioner for Refugees Filippo Grandi in a press release.

“This is the path to helping the most vulnerable among us regain lives of dignity,” he added.

The undertaking comes ahead of the UN Summit on Addressing Large Movements of Refugees and Migrants, on 19 September at UN Headquarters, in New York, as well as a summit on the global refugee crisis, hosted by US President Barack Obama during the high-level segment of the 71st session of the UN General Assembly on 20 September.

According to UNHCR, the countries said that they are confronted with a growing number of asylum-seekers and refugees and that they recognize the need for asylum systems to identify and respond to those in need of international protection.

Most asylum applications are from people who have fled widespread violence by heavily-armed, transnational gangs in El Salvador, Honduras and Guatemala that have made these countries – known collectively as the Northern Triangle of Central America – one of the most dangerous places on earth.

The UN refugee agency added that the ‘San Jose Action Statement’ also “stressed the importance of ‘timely identification and documentation’ of people in need of protection, of ‘unhindered access to fair and efficient procedures for protection,’ of finding alternatives to detention for asylum seekers and of ensuring their access to legal aid.”

In individual declarations accompanying the Action Statement, Costa Rica, Mexico, US and Honduras said that they would undertake efforts to address the challenges confronting refugees and to protect vulnerable people fleeing violence.

The joint statement is the outcome of an unprecedented gathering of concerned governments organized by UNHCR and the Organization of American States (OAS) in Costa Rica last month. It was also attended by four countries of South America and other interested States.

“[The Action Statement] is a visible and significant demonstration of the willingness of countries from the region to work together to address the plight of refugees, internally displaced persons and others in need of protection, in a spirit of solidarity and within a collaborative responsibility sharing framework,” said UNHCR’s Assistant High Commissioner for Protection, Volker Türk, who co-chaired the meeting with Luis Almagro, Secretary General of the OAS. 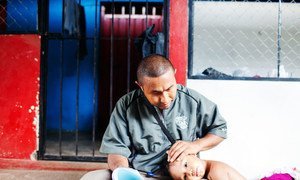 With people fleeing violence in Central America in numbers not seen in more than 30 years, representatives from Governments, international organizations and civil society gathered for a United Nations-backed event on the issue in San José, Costa Rica, and agreed to enhance access to asylum and increase regional responsibility-sharing.