OCHA
Emergency Relief Coordinator, Stephen O’Brien (centre), briefs the media in Juba at the end of his three-day mission to South Sudan.
3 August 2016

United Nations Emergency Relief Coordinator Stephen O’Brien concluded today his three-day mission to crisis-torn South Sudan, voicing serious concern at the humanitarian situation in the country and in particular the violence against civilians, as well as attacks against aid workers, which is hampering efforts to respond to the needs of the people affected by the fighting.

“I am outraged by the heinous acts of violence that have been committed against civilians, including by members of the armed forces,” Mr. O’Brien said, calling for swift and decisive action to halt these abuses and hold the perpetrators accountable, in a press release issued by the UN Office for the Coordination of Humanitarian Affairs (OCHA) following his press conference in Juba.

He stressed that despite challenges that aid workers are facing on a daily basis, “[They] are working tirelessly and courageously to bring desperately needed relief to people in need.”

“It is imperative that humanitarian organizations are granted free, safe, and unhindered humanitarian access, to reach all people in need, wherever they are,” stressed the UN humanitarian chief.

Mr. O’Brien’s visit came as the situation in South Sudan has worsened after fighting broke out three weeks ago in and around the capital, Juba, between rival forces backing President Salva Kiir and First Vice-President Riek Machar.

In the press release, OCHA warned that humanitarian situation in South Sudan is “catastrophic”: more than half of the population – some 6.1 million people – are in need of humanitarian assistance and an estimated 4.8 million people are severely food insecure. A quarter of a million children are facing severe acute malnutrition.

Furthermore, some 1.6 million people are internally displaced and, throughout nearly two years of instability, more than 900,000 overall have fled to neighbouring countries, including more than 60,000 who fled to Uganda in July alone.

The UN humanitarian wing added that, so far this year, aid workers have reached more than 2.8 million people with assistance and protection.

It also noted that the Humanitarian Response Plan for 2016, which includes funding needs for 114 humanitarian partners to respond to the most urgent needs of the affected population, is only 40 per cent funded, leaving a gap of $765 million. “More funding is urgently required for the scale-up of the response across the country,” the agency said in the release.

In addition, relief operations in the country have been severely affected by violence against aid workers and aid assets, as evidenced by the looting of vital humanitarian warehouses during and after the fighting in capital Juba.

Since December 2013, at least 57 aid workers have been killed in South Sudan, including one worker who was killed during the recent conflict in Juba. Many more are still missing.

Commending the work of the aid workers in difficult situations, Mr. O’Brien said: “I categorically condemn all attacks against aid workers and assets and call on all those in leadership positions to step up and take action against these wholly unacceptable incidents.”

The press release adds that the protection of civilians in the country is of paramount concern. It noted extensive reports of rape and other forms of sexual violence during recent fighting, including in the capital Juba and Wau, in the north-west of the country.

“My visit to Wau and Aweil (also located in north-western South Sudan) was heart-wrenching,” said Mr. O’Brien. “The women I met in both locations told me that it is a daily struggle to keep themselves and their children alive, one for fear of violence, the other due to hunger.”

During his three-day visit, Mr. O’Brien met with humanitarian partners and Government officials, and visited people affected by the crisis in Juba, Wau and Aweil. In his meetings, the Emergency Relief Coordinator stressed that: “We humanitarians are here in South Sudan to save lives and for no other reason. Our task and our demand by the UN and beyond is to impartially meet the urgent and severe humanitarian and protection needs of the millions of suffering people in this country.”

In related news, the Special Representative of the Secretary-General on Sexual Violence in Conflict, Zainab Hawa Bangura has echoed Mr. O’Brien’s condemnation of the violence in the country, in particular the sexual violence crimes being committed.

In a press release issued by her Office, Ms. Bangura called on the Heads of State and Government of the Intergovernmental Authority on Development (IGAD) to acknowledge the gravity of sexual violence, to request South Sudanese authorities to take immediate measures to prevent their troops and associated militias from committing these crimes, and to take action against those responsible.

“IGAD should ensure that the military and political leadership of South Sudan move beyond rhetoric and implement the commitments they have made in their 2013 communiqués on preventing and responding to sexual violence crimes,” Ms. Bangura stressed.

Amidst the politics, we must not forget the survivors SRSG Bangura

IGAD is an eight-country bloc in Africa comprising Djibouti, Eritrea, Ethiopia, Kenya, Somalia, Sudan, South Sudan and Uganda. The leaders of its member countries are meeting in the Ethiopian capital, Addis Ababa, for an extra-ordinary summit on the situation in South Sudan.

Ms. Bangura emphasized that the bloc must use its leverage over the parties to this conflict to ensure that they immediately cease, prevent and decisively respond to serious crimes, including sexual violence. “IGAD must clearly stress the need for accountability, in line with the Agreement on the Resolution of Conflict in South Sudan of August 2015,” she emphasized.

She also called on the conflict parties to stop their troops from committing such crimes, and on the Government of South Sudan to investigate the alleged violations and abuses and prosecute those found responsible.

“Amidst the politics, we must not forget the survivors. The international community stands in solidarity with them and will spare no effort to ensure that they receive adequate care, assistance and livelihood support while ensuring that the perpetrators, irrespective of their ranks, are held accountable,” Ms. Bangura reiterated. 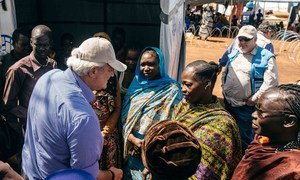 In South Sudan, UN humanitarian chief calls on all parties to work together for peace

United Nations Emergency Relief Coordinator Stephen O’Brien today called on all actors in South Sudan, including the international community supporting the country, to work together for a peace that will enable the nation and its people to realize their hopes for a better future.