Marking the second anniversary of the seizure of Sinjar by the Islamic State in Iraq and the Levant (ISIL), United Nations Secretary-General Ban Ki-moon today expressed his profound sympathy to the families of the victims and the survivors as well as deep concern for safety of the people – particularly thousands of Yazidi women and children – still being held captive.

“The Secretary-General reiterates his strong condemnation of the heinous crimes that continue to be committed by ISIL against the diverse ethnic and religious communities of Iraq,” said a statement issued by Mr. Ban’s spokesperson.

The UN chief in his statement went on to express deep concern about the safety of the people who remain in ISIL’s captivity, in particular the thousands of Yezidi women and children, and he called on all those engaged in the fight against ISIL [also known as Da’esh] to make their release a “prime objective” in their military operations.

“The Secretary-General stresses that the crimes committed by ISIL in Iraq may constitute war crimes, crimes against humanity and even genocide,” the statement continued, underscoring Mr. Ban’s call on the Iraqi Government and the international community to continue to support the survivors.

Mr. Ban also called on the Government of Iraq to continue identifying ways to bring the perpetrators of these crimes to justice without delay, based on fair trial and due process, which could include the option of a referral to the International Criminal Court (ICC).

Meanwhile, earlier in the day, a United Nations-mandated inquiry on human rights in Syria today called for an end to the genocide and other crimes committed by ISIL/Da’esh against the Yazidis, recommending that the UN Security Council refer the situation to the ICC or an ad hoc tribunal.

In the early hours of 3 August 2014, fighters of ISIL, also known as ISIS, left their bases and brutally attacked the Yazidis of Sinjar, a distinct religious group whose beliefs and practice span thousands of years, the Commission of Inquiry on Syria said in a statement.

The Commission’s report, titled They Came to Destroy: ISIS Crimes Against the Yazidis, released on 16 June 2016, determined that ISIS has committed the crime of genocide, as well as multiple crimes against humanity and war crimes, against the Yazidis.

Two years on, crimes committed by ISIS against the Yazidis, including genocide, are “ongoing,” with more than 3,200 women and children still held by the group and being subjected to almost-unimaginable violence, the Commission said.

Most are in Syria where Yazidi women and girls continue to be sexually enslaved and Yazidi boys, indoctrinated, trained and used in hostilities. Thousands of Yazidi men and boys remain missing.

The Commission called for renewed attention to its findings and its wide-ranging recommendations to the UN, the Syrian Government and the wider international community, including the one encouraging the Security Council to urgently refer the situation to ICC or an ad hoc tribunal with relevant geographic and temporal jurisdiction, in line with each State’s individual obligations under the Genocide Convention.

“It is the responsibility of the United Nations, and the international community to take action to stop the on-going genocide, to care for its victims, and to bring those responsible to justice,” the statement said. 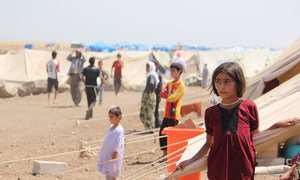