UNHCR/Yahya Arhab
In Yemen, internally displaced children stand outside their family tent after the family fled their home in Saada province and found refuge in Darwin camp, in the northern province of Amran.
30 July 2016

With all eyes on Yemeni peace negotiations, the United Nations envoy for the country announced today that the UN-supported talks under way in Kuwait have been extended for an additional week.

“We hope that the delegations can utilize this remaining week to achieve progress on the path towards peace,” said Ismail Ould Cheikh Ahmed, the Secretary-General's Special Envoy for Yemen, the Special Envoy, who earlier today presented to the parties a proposal for a political solution that draws on the common ground achieved in the preceding weeks.

He had requested the extension in a letter to the Government of Kuwait, the host of the peace talks, and met with Sheikh Sabah Khaled Al-Hamad Al-Sabah, First Deputy Prime Minister and Minister of Foreign Affairs, to review the latest developments and the plans for the coming days.

In mid-July, Mr. Ould Cheikh Ahmed appealed to the parties, stating that “the time has come for you to take definitive decisions that demonstrate to the Yemeni people the sincerity of your intentions and your national obligations.”

Vast swathes of war-torn Yemen – 19 out of 22 governorates – are facing severe food insecurity, and the situation within affected areas is likely to deteriorate if conflict persists, according to a new assessment by the United Nations and partners.

The latest Integrated Food Security Phase Classification (IPC) analysis confirms that over half the country's population is living in 'emergency' or 'crisis' levels of food insecurity, with some governorates seeing as much as 70 per cent of their population struggling to feed themselves.

Following nearly 16 months of conflict in Yemen, the cessation of hostilities was declared on 10 April and has since continued to provide relief from violence in many parts of the country. But serious violations have occurred in Marib, al Jawf, Taiz and in the border areas with Saudi Arabia. 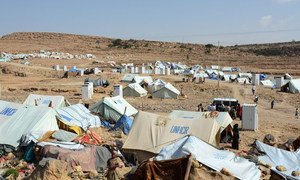 The United Nations-supported Yemeni peace talks continued in Kuwait today after several weeks of daily sessions and two weeks of intensive consultations with regional and political leaders, the UN envoy for the country has said.