The Security Council this evening requested Secretary-General Ban Ki-moon to establish a United Nations police officers component in Burundi for an initial period of one year to monitor the security situation and to support the Office of the UN High Commissioner of Human Rights (OHCHR) in monitoring rights violations and abuses in the crisis-gripped country.

Acting on the recommendations of the Secretary-General, the Council adopted a new resolution by a recorded vote of 11 in favour with four abstentions (Angola, China, Egypt and Venezuela), which authorized the deployment of a UN police component of up to 228 officersi.

Further by the text, the UN police would be placed under the authority of a Senior Adviser to the United Nations and be deployed in the capital, Bujumbura and throughout Burundi. The Secretary-General was further requested “to ensure their progressive deployment.”

The Security Council urged the Burundian Government and all Burundian parties to cooperate fully in the deployment and activities of the UN police component and to allow UN staff to travel freely and unhindered in places of detention and to prisoners.

As for observers and experts from the African Union (AU), the Council urged the Burundian government to allow without delay the continuation of the full deployment of 100 AU human rights observers and 100 military experts. It also urged the Government and other stakeholders to extend full cooperation to those observers and experts and provide them with full access for the purpose of fulfilling their mission.

By other terms of the resolution, the Security Council urged all parties in Burundi to reject all forms of violence and to refrain from any action that would jeopardize peace and stability in the country or undermine the inter-Burundian dialogue.

It also urged the Government to “respect, protect and ensure respect for human rights and fundamental freedoms for all.” It welcomed the steps taken by the Government to lift some prohibitions on media and civil society, cancel some arrest warrants and release a number of detainees.

The Security Council urged the Government to urgently meet other commitments it announced 23 February 2016, to allow all media to resume operations and release all political prisoners. It also urges him to continue to cooperate fully with the OHCHR.

The Council went on to expresses its intention to take targeted measures against all stakeholders in Burundi and abroad, threatening the country's peace and security.

Regarding the inter-Burundian dialogue, the 15-member Council urged the Government and “all parties committed to a peaceful solution” to participate immediately,cactively and constructively in the political dialogue under the aegis of the Commonwealth of East Africa and endorsed by the AU.

Finally, the Council called on States of the region to contribute to the search for a solution to the crisis in Burundi to refrain from any interference, including any support for the activities of the armed movements in any form whatsoever.

Burundi was thrown into crisis more than a year ago when President Nkurunziza decided to run for a controversial third term that he went on to win. To date, it has been reported that hundreds of people have been killed, more than 240,000 have fled the nation, and thousands more have been arrested and possibly subjected to human rights violations. 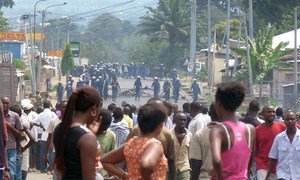