29 July 2016
Five middle-distance runners from South Sudan, until recently living in Kenya’s Kakuma refugee camp, have flown out of the capital city of Nairobi to take part in the first-ever Olympic refugee team for the Summer Games in Rio de Janeiro, Brazil, the United Nations refugee agency has said.

“I feel very excited. This is the first chance for the refugees to participate in the Olympics and to give us hope, for us to encourage the young generations of fellow refugees who are remaining in the camps maybe to continue their talent,” Rose Nathike Lokonyen, 23, told the Office of the UN High Commissioner for Refugees (UNHCR) prior to her departure.

The five runners – two women and three men – will join five others from Syria, Democratic Republic of the Congo and Ethiopia to make history by taking part in the first-ever Refugee Olympic Team.

The 10-member team, backed by UNHCR and the International Olympic Committee, was created to bring global attention to the magnitude of the global refugee crisis and act as a symbol of hope for refugees worldwide.

“We have a message to tell the world: We have come as refugees, we have come as ambassadors for refugees, now we are here to show you that we can do everything other human beings can do, and also be part of a peace promotion around the world,” said 21-year-old Yiech Pur Biel.

“Their participation in the Olympics is a tribute to the courage and perseverance of all refugees in overcoming adversity and building a better future for themselves and their families,” he said in a recent statement.

Officially, the athletes will compete for the Refugee Olympic Team and march with the Olympic flag immediately before host nation Brazil at the opening ceremony.

Earlier in the week, UN Secretary-General Ban Ki-moon called for a worldwide cessation of hostilities, as all UN Member States pledged to observe the historic 'Olympic Truce' during the Games.

“A respite in fighting would manifest the values that the Games seek to promote: respect, friendship, solidarity and equality,” said Mr. Ban in his message.

“I call for a push to match efforts to win medals on the playing fields with work to silence guns on the battlefields,” he added.

The Secretary-General, recalling the late Olympic Gold Medallist and the UN Messenger of Peace, Muhammad Ali's message that he 'used boxing because it's a platform to get to people,' urged everyone to press all warring parties to lay down their weapons during the symbolic truce period. 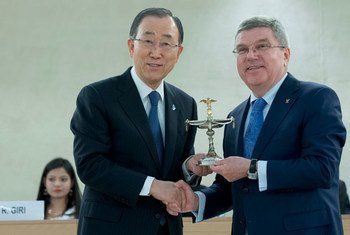 29 April 2016
During a visit to Geneva today, United Nations Secretary-General Ban Ki-moon welcomed the first-ever Olympic refugee team to compete in the international event, and received the Olympic Cup Award on behalf of the UN.