OCHA
Deputy Humanitarian Chief Kang (right foreground) visiting Malawi, a country where 6.5 million people – nearly 40% of the population – won’t be able to get enough food this year, because of the effects of El Niño.
27 July 2016

Following a week-long visit to southern Africa, the United Nations deputy humanitarian chief has called for increased efforts to help mitigate the impact of the La Niña weather phenomenon occurring towards the end of the year.

“The impact of the current El Niño is felt globally, affecting over 60 million people. Southern Africa is of particular concern as the region is facing its worst drought in 35 years, with an estimated 40 million people facing food insecurity, including some 23 million in need of urgent humanitarian assistance,” said Assistant Secretary-General and Deputy UN Emergency Relief Coordinator Kyung-wha Kang at a press conference this afternoon at UN Headquarters in New York.

“The high probability of La Niña phenomenon towards the end of this year is likely to exacerbate the humanitarian situation, as coping capacity in most of these countries have been eroded,” she added.

After attending and co-chairing a 14 July international conference in London on responses to the impacts of El Niño in southern Africa, Ms. Kang visited Malawi and Madagascar from 16 to 22 July to see the situation first-hand.

El Niño, and its counterpart La Niña, which is characterized by unusually cold ocean temperatures in the Equatorial Pacific, occur cyclically, in recent years, mainly due to the effects of global climate change. Extreme weather events associated with these phenomena – such as droughts and floods – have increased in frequency and severity.

According to the UN Office for Coordination of Humanitarian Affairs (OCHA), El Niño-related conditions have compounded existing vulnerabilities, resulting in severe food shortages across southern Africa. Agricultural production has been crippled, and almost half a million drought-related livestock deaths have been reported while water sources and reservoirs are severely depleted.

Besides Malawi and Madagascar, the most severely affected countries include Angola, Lesotho, Mozambique, Swaziland and Zimbabwe.

During today’s press conference, Ms. Kang highlighted that at the donor meeting, she urged international donors and other development partners to join the UN in raising the profile of the El Niño crisis facing the region, and the urgency of the response needed.

“This must include more investment in development and more joint humanitarian-development programming,” she said.

She also noted that she was very encouraged by the commitment of donors at the London conference to assist the people worst affected by the humanitarian crisis. Yesterday, the Southern African Development Community (SADC) launched a regional appeal, covering 13 countries and seeking funding for 10 Member States that have asked for international support.

To complement the appeal, the Regional Inter-Agency Standing Committee – consisting of the UN and non-governmental partners – has prepared a regional plan of action, seeking $1.2 billion to support 12.3 million people across seven countries.

Ms. Kang said that during her mission to Malawi and Madagascar, it was clear that El Niño-related conditions have compounded existing vulnerabilities, resulting in severe food shortages.

In Malawi, nearly 40 per cent of the population – about 6.5 million people – are projected to face a lack of food and inadequate cash to meet basic survival needs at the peak of the lean season in January, which means they will be unable to meet their annual food requirements.

“I spoke to mothers and children affected by malnutrition about the support that they are receiving. I also met with communities receiving help to improve their agricultural production. Despite the challenges, I was glad to see that communities are participating in projects that will help them take their livelihoods into their own hands and build resilience to better mitigate the impact of any future crisis,” Ms. Kang said.

“But this crisis is not only about food insecurity: humanitarian response also needs to also focus on health, water and sanitation, protection, education and other kinds of support,” she added.

In Madagascar, in the Grand Sud region at the southern tip of the island country, the scale of the drought has devastated the coping capacities of communities barely surviving on subsistence farming, Ms. Kang said.

“Hard-won development gains and even minimum coping mechanisms hang in the balance. Chronic poverty resulting from decades of marginalization and lack of development investments has meant that humanitarian assistance has had to fill the gap,” she emphasized.

However, she noted that she was also able to see some positive outcomes from the efforts of UN agencies and their partners.

For example, the World Health Organization (WHO) is piloting a health surveillance application, using funding from the Central Emergency Response Fund (CERF) as part of its support to the health centre.

In addition, to encourage people to stop the custom of open defecation, the UN Children’s Fund (UNICEF) is helping communities to design and build community-led total sanitation toilets, which use local materials and training. About 65,000 of these have so far been built in the region.

She also noted that she met with the political leadership in both countries and discussed ways of strengthening the response to the drought and the need to build the resilience of affected communities to mitigate the recurrent impact on lives and livelihoods.

“I would like to acknowledge the efforts so far of the Governments of Malawi and Madagascar. With the increasing probability of La Niña occurring towards the end of the year we will need to work even harder in the months before the event to help mitigate its impact,” Ms. Kang said. 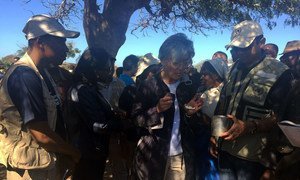 Wrapping up a visit to southern Africa, the United Nations deputy humanitarian chief today called for urgent action to assist millions of people across the region where local coping capacities have been impacted by the worst El Niño-induced drought in 35 years.