In a telephone call with the Turkish Foreign Minister today, United Nations Secretary-General Ban Ki-moon sought an update on current investigations and measures to hold those responsible for the attempted coup to account, and reiterated his expectation that Turkey adhere to its international human rights obligations.

During the phone call with Turkish Foreign Minister Mevlüt Çavusoglu, Mr. Ban expressed his solidarity and sympathies to the Government of Turkey and the families of the victims of the 15 July coup attempt.

“While recognizing the extraordinary circumstances prevailing in the country following the coup attempt, the Secretary-General expressed his expectation that Turkey adhere to its international human rights obligations, upholding fundamental rights and universal principles, including the freedom of expression, freedom of movement and peaceful assembly, independence of the judiciary and of the legal profession, right to fair trial and strict adherence to due process,” according to the statement.

The Secretary-General also expressed his concern over the extent of the recent governmental decree regarding the implementation of the state of emergency, which enlists a number of measures restricting the full exercise of individual rights.

While welcoming the announced release of 1,200 military detainees, the Secretary-General referred to “worrying reports” of mistreatment and abuse of some of those who are still in custody and their detention conditions.

He also underscored his deep concern about the scope of continuing widespread arrests, detentions and suspensions, which reportedly cover many segments of Turkish society and Government institutions.

“Credible evidence on those under investigation has to be presented swiftly to the judicial system so that legal determination could be made before the court of law,” the statement said.

Last week, Mr. Ban urged Turkish authorities to ensure that constitutional order and international human rights law are fully respected following the declaration of a three-month state of emergency as a result of the attempted military coup.

According to media reports, thousands of soldiers have been arrested and hundreds of judiciary members removed since the uprising, which left at least 290 people dead and more than 2,000 injured following a night of violence. 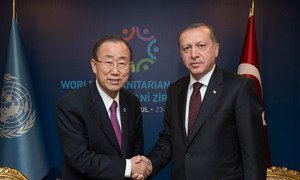 Following the declaration of a three-month state of emergency in Turkey as a result of an attempted military coup late last week, United Nations Secretary-General Ban Ki-moon has urged Turkish authorities to ensure that constitutional order and international human rights law are fully respected.