OCHA/Gemma Connell
A boy stands outside a building damaged during fighting in Aleppo City, Syria.
26 July 2016

The United Nations Children's Fund (UNICEF) reiterated today that attacks on health facilities are a blatant violation of international humanitarian law and can amount to war crimes, in response to the recent airstrikes on four hospitals and a blood bank in eastern Aleppo city in Syria.

“Health facilities must never be attacked or damaged, and health workers should be allowed to provide medical treatment and services to all people in need wherever they are inside Syria,” said a statement issued today by the UN agency.

The four hospitals and a blood blank were reportedly hit several times on 23 and 24 July, disrupting key life-saving health services for up to 300,000 civilians, the statement noted.

According to reports, a two-day-old baby died in his incubator due to interruptions in the oxygen supply as a result of air strikes on al-Hakim.

“This UNICEF-supported paediatric hospital, the only one in the city, was reportedly hit twice in less than 12 hours,” the statement said.

These hospitals in the al-Shaar neighbourhood make up half of all health facilities operating in the area.

“Health facilities in Syria are being attacked with alarming ferocity,” the statement said, citing the World Health Organization's estimates of more than forty attacks this year.

It is estimated that nearly sixty per cent of public hospitals in the country have closed or are only partially functional, the statement added. 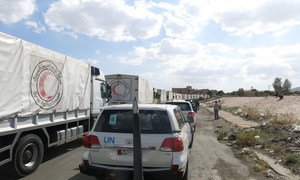 Citing the alarming humanitarian conditions across Syria, the United Nations Emergency Relief Coordinator today urged fresh momentum and action to protect civilians and ensure sustained aid access “before it's too late,” including through the establishment of a weekly, 48-hour pause of the fighting in eastern Aleppo, where food supplies are expected to run out next month.