UNHCR/Will Swanson
A young refugee and her family cross the border between South Sudan and Uganda.
26 July 2016

Recent fighting in South Sudan has forced 37,491 people to flee to Uganda in the past three weeks, averaging more than 4,000 a day in the past week, the United Nations refugee agency warned today.

“To put this in context, more refugees have arrived in Uganda in the past three weeks than during the entire first six months of 2016, when 33,838 came there in search of safety,” Adrian Edwards, a spokesperson for the Office of the UN High Commissioner for Refugees (UNHCR), told reporters in Geneva.

Yesterday, an estimated 2,442 refugees were received in Uganda from South Sudan. More than 90 per cent of arrivals are women and children.

“The new arrivals in Uganda are reporting ongoing fighting as well as looting by armed militias, burning down of homes and murders of civilians,” Mr. Edwards said. “Some of the women and children told us they were separated from their husbands or fathers by armed groups, who are reportedly forcibly recruiting men into their ranks and preventing them from crossing the border.”

He noted that daily arrivals were averaging around 1,500 just 10 days ago, but have risen to over 4,000 in the past week. People are coming from South Sudan's Eastern Equatoria region, as well as Juba and other areas of the country, he said.

The intensity of the recent fighting between rival factions loyal to President Salva Kiir and First Vice-President Riek Machar in Juba has subsided, but the security situation remains volatile. “Further surges in arrivals are a real possibility,” he said.

The influx is straining the capacity of collection points, and transit and reception centres. Over the weekend, humanitarian organizations worked to decongest the collection points and installed temporary shelters to increase capacities. UNHCR has deployed additional staff, trucks and buses to assist.

At its peak, more than 11,000 refugees were staying in Elegu, in northern Uganda, in a compound equipped to shelter only 1,000 people. By the end of this past weekend, the centre had been significantly decongested, and just 300 people slept there on Monday night. Many of the refugees have been moved to the Nyumanzi transit centre, where they are receiving hot meals, water, shelter and other life-saving assistance; others have been taken to expanded reception centres in Pagirinya.

The management and expansion of reception facilities as well as the opening of a new settlement area remain key priorities. A new settlement area has been identified in Yumbe district, with the capacity to potentially host up to 100,000 people. Temporary communal shelters are also being built to accommodate the continuing arrivals.

The humanitarian response to the influx of South Sudanese refugees is sorely lacking due to severe underfunding. “The inter-agency appeal is only funded at 17 per cent, which is constraining UNHCR and its partners to provide emergency and life-saving activities only and causing limitations to the full breadth of humanitarian assistance that can be offered,” Mr. Edwards said.

South Sudan's conflict, which erupted in December 2013, has produced one of the world's worst displacement situations with immense suffering. Some 1.69 million people are displaced inside the country, while there are now 831,582 South Sudanese refugees abroad, mainly in Ethiopia, Sudan and Uganda. 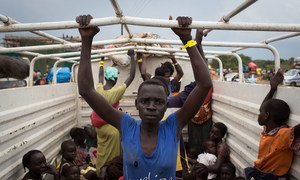 Some 26,500 South Sudanese, mostly women and children, have crossed into Uganda since fighting between rival forces erupted in and around the capital, Juba, on 7 July, the United Nations refugee agency reported today.