Citing the alarming humanitarian conditions across Syria, the United Nations Emergency Relief Coordinator today urged fresh momentum and action to protect civilians and ensure sustained aid access “before it's too late,” including through the establishment of a weekly, 48-hour pause of the fighting in eastern Aleppo, where food supplies are expected to run out next month.

“The international community has shown unity of purpose before and must show it again, before it's too late and we face the prospect of losing another generation of Syrians to conflict and misery,” Stephen O'Brien, who is also the Under-Secretary-General for Humanitarian Affairs, said in his briefing to the Security Council.

He stressed the importance of rebuilding the momentum created in the first half of the year, in particular by the humanitarian task force of the International Syria Support Group (ISSG) – consisting of the UN, the Arab League, the European Union and 18 countries that have been working on a way forward since late last year.

This must include, he said, a restoration and consolidation of the cessation of hostilities; all necessary action from the parties and their supporters to ensure safe, sustained, unhindered and unconditional access; and an immediate end to the sieges which still collectively punish hundreds of thousands of civilians mercilessly.

Across Syria, around 5.5 million people are trapped in hard-to-reach and besieged areas with little physical protection and limited access to basic life-saving assistance, he said.

Humanitarian aid has reached over one million people in besieged and hard-to-reach areas, but the enormous access challenges still exist, he stressed.

The conflict generated “gargantuan levels of suffering” for civilians, and words are not adequate to depict the grim and gruesome reality for the people of Syria today, he said.

Since 7 July, civilian, humanitarian and commercial movements in and out of eastern Aleppo city have come to a halt. Castello Road, the last remaining access route in and out of the east of the city, has now been cut off due to fighting.

Food in east Aleppo is expected to run out by the middle of next month. While medical supplies are available for a longer period, the continuing attacks on medical facilities in eastern Aleppo would have a devastating multiplier effect, not only killing people and destroying facilities, but leaving thousands unable to get even basic care at a time when they need it most.

“The international community simply cannot let eastern Aleppo city become yet another – and by far the largest - besieged area,” he said, warning that “the clock is ticking” and urging the parties, and those with influence, to act now to establish a weekly, 48-hour humanitarian pause for eastern Aleppo city so that the UN and partners have safe, regular and sustained access to the quarter of a million people trapped behind the front lines.

“This must be a full United Nations call – not just from me as the UN's humanitarian chief – this has to come from you, the Security Council,” he said.

Despite approvals granted by the Government, the UN and humanitarian partners have not been able to access the towns because of tension among parties to the agreement, heavy aerial bombardment in Idlib, and shelling on Foah and Kefraya, he said. 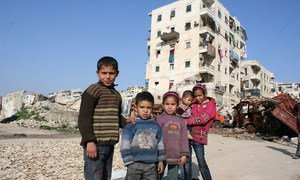 The United Nations humanitarian chief today expressed grave alarm over developments in the eastern part of Aleppo city in Syria, where civilian, humanitarian and commercial movements have been effectively cut off following the closure of the last remaining access route in and out of the area.