Concluding a six-day visit to Somalia, a United Nations child rights envoy has called for better protection of children caught up in armed conflict, urging the country's authorities to treat former child soldiers as victims in need of protection rather than as criminals.

“We need not only to get them out of death row, we need to give them to child protection actors and to work with them, if some need psycho-social treatment, if they need to be helped to return to the community,” said Leila Zerrougui, the Special Representative of the UN Secretary-General for Children and Armed Conflict.

“Whatever we can do, we can work together on that and assure the Government and the authorities that we will do our best to support their initiative,” she added.

Addressing a press conference in Mogadishu at the end of her visit, Ms. Zerrougui expressed optimism over the efforts of the Federal Government of Somalia and authorities in Puntland to improve the conditions of children in armed conflict.

The Special Representative visited children in detention centres in Garowe and Bossaso, and urged authorities throughout Somalia to deal with captured children as victims instead of criminals.

“I would like to emphasize the importance of the reintegration. When something wrong happens, we need to make sure that we fix the problem and deal with the children in a way that when they return to the community, they are not stigmatized, they are not abused and they are not left on the streets,” she stressed.

The Special Representative also called on authorities to integrate former child soldiers into the community, and address stigmatization and abuse of underage victims of violence.

In March, Puntland security forces captured and detained dozens of child soldiers after defeating an attempted incursion by Al-Shabaab militants.

During her visit to Puntland, Ms. Zerrougui met with Somali President Abdiweli Mohamed Ali Gaas, as well as the Vice-President, the Minister of Justice, judges and prosecutors.

She said she obtained assurances from Puntland authorities that 12 child soldiers who were captured and later sentenced to death will not be executed.

The Special Representative's visit to Somalia comes ahead of the presentation of the annual report of the UN Secretary-General on Children and Armed Conflict, which is due on 2 August. 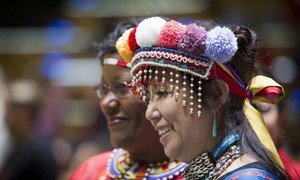 United Nations Secretary-General Ban Ki-moon today announced the launch of a plan to realize the full rights of indigenous peoples who are increasingly being drawn into conflicts over their lands and resources.